We're covering all of our bases in today's edition of Monday Mailbag. Thanks to all of the folks who contributed questions -- this has been the most fun yet!

Why would anyone make this, and why can’t I stop laughing at it?

Where on Earth did you find that?? Hilarious. 10 points.

What is everyone's drink of choice for day games? I’m not talking only tailgating either… I always bring [sneak] something different into the stadium depending on time, weather, opposing team, etc. It’s tougher because it’s early, you’re in the sun, it’s hot, and alcohol already dehydrates you. I always shoot for something to keep my post-tailgate buzz going, but that isn’t going to murder me in the afternoon sun. What’s y’all’s drink of choice?

My first couple of years in college, gamedays were always either rum & coke or whiskey & coke. I guess I was young and willing to tolerate the fourth quarter hangovers... Now I'm definitely a beer guy before games. I'm content drinking 10 cheap beers (definite Bud Light guy) or a 6-pack of something nicer...either gets the job done. Gotta make sure I drink plenty of water before & during the game though, or those afternoon games in September can turn really miserable, really quick. 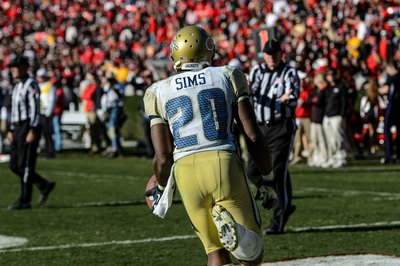 Read more about how I feel about this fall's B-Back brigade.

What is your opinion on the BB back position this fall? I know there has been some speculation of Custis playing some. What are your opinions about this and what do you think is the best choice for the team? (BTW, I’m a big Laskey fan, don’t upset me.)

Glad you asked! Hope my answer satisfied. The quick rundown: Sims will be good, Laskey could end up being better (I think Sims is the starter all year though), Snoddy needs to get into the game, Custis will probably redshirt but would contribute if he played, and Connors might be the best third-string player on the team.

Last season we thought that our team revolved around the first game. Unfortunately we lost that in a nail-biter. Do you think that this year we have ONE game that will make be our "swing game" so to speak… Meaning, if we win, we could have an amazing season and if we lose were DOOMED TIL THE END OF TIME?? But seriously, most important game, GO!

I hate the cliche'd nature of picking the Virginia Tech game again, but I think timing-wise that's a huge game for us. Last weekend of September, Thursday night at home on short rest directly after 2 other conference games...that's the one that tells us what this team is made of. I expect the team to be undefeated entering this game, and I have a hard time seeing them lose this one at home.

Win, and you have a ton of momentum moving forward, not to mention a 4-0 record and a 3-0 conference record.

Lose, and your psyche is messed up and attaining bowl eligibility (much less anything more) just got a lot tougher...not to mention you have 10 days of rest before traveling to the black hole of culture and Tech football ability that is Coral Gables, FL. But I digress. Virginia Tech in Week 4 will make or break the season.

What is the one game that Tech fans are underrating and think of as a sure win that you think that we should be most worried about?

Get ready to gasp.

Playing them on the road in Week 2, when our offense typically hasn't hit its rhythm yet. A team that's improving and hungry to make a name for itself. Sounds an awful lot like Kansas in 2010, huh? This one is dangerous. Hope the team's ready to go.

As far as questions go, you mentioned in this past Monday’s Mailbag that Custis has some pending NCAA Clearinghouse issues. He’s apparently practicing with the team now, so does that mean those issues are resolved?

I can't imagine a kid getting into Tech but not being able to attain NCAA academic eligibility.

Honestly, I can't imagine a kid getting into Tech but not being able to attain NCAA academic eligibility -- I'm thinking the biggest issue at this point is making sure that the NCAA counts the classes he took in the same way that Tech counts them, and that his test scores are legit...which I have no idea how they wouldn't be. It should be fine, but it's also a bit concerning how long this has been drawn out.

Since Alford has left the team and Burden is out for the season, how does that impact our offensive line? What kind of depth do we have at O-line now?

They have a number of guys who have been cross-trained to play center (Ray Beno, Thomas O'Reilly, Will Jackson). Obviously that's a loss of one more guy which thins out the depth, but knowing what they know now gives them a chance to prepare for the situation before issues arise.

Given that Alford has left the team, Burden is out for the season, and Beno already has a position, does that make Center Jay Finch indispensable?

See above answer -- Finch is one of the most valuable individuals on the team, but I can't say that the wheels will come off altogether if he get hurt.

When CPJ lines up the QB not under center, is it the pistol or the shotgun? My opinion, it is more properly referred to as a pistol because the QB is 5 yards back from the LOS and the BB directly lines up behind the QB. If the BB was offset and the QB was 7-8 yards, then I’d call it a shotgun.

Of the incoming freshmen football players, which ones do you expect to play this season?

Harrison Butker kicks, PJ Davis plays on special teams, and Ricky Jeune is the second receiver off the bench, in my opinion. Any others either just light it up in practice or provide depth due to injuries.

I had a dream that GT surrendered 30+ to Elon while scoring 70+ against them. Is that an ill omen?

They wouldn't have scored 30 on last year's defense, so I don't think we have much to worry about.

I think the DC has the biggest impact. Not sure that the position coaches will have too much impact either way, but Ted Roof and his scheme will work wonders on last year's unit

"They're your defense, have at it."

How involved is CPJ in coaching/planning the defense with Roof as the DC?

My understanding is that he basically looked at Groh and said, "They're your defense, have at it. I'm over here if you have questions, otherwise I'll see you at the end of practice." I have a feeling that he has a similar level of trust in Roof. Guy knows his craft, let him work how he's going to work.

Do you think Will Jackson regrets imitating CPJ?

Only way I know how to answer this question...

If I did an impression of Will Jackson, it would involve running stairs at Bobby Dodd #BelieveIt

Joey/staff, if you knew we were guaranteed a win and a loss against either VT or Miami for this season, who would you pick to win against and who to lose and why?

Part of me wants to beat Virginia Tech at home on a Thursday, but part of me wants to see us beat Miami before I graduate. As much as I can't stand Miami fans, I think I'd rather beat the Hokies in a very important game that I'll be at.

Also, I haven’t heard much love for Synjyn Days this year. Is he falling down the depth charts or is CPJ not mentioning him any to motivate him for this season? I remember towards the end of last year he was used a decent amount at A-back if my memory recalls correctly.

To me, Days is a solid A-Back, but not a guy you want as a starter. I sometimes think he has issues with getting vertical, and that he wants to carry the ball laterally as long as he can. Good blocker and pass-catcher though...we'll see what happens.

Is this a drinking club with a football problem?

Hah, we have much bigger problems than football around here.

Have you heard the new Wilco album?

I haven't. Heard good things about the band, never listened to them though.

We have much bigger problems than football around here.

Have you seen the puddle of water that has started collecting on the North Pole?

I think it was started by the Braves being so hot. (ahem)

Has the Pizza Dip guy paid his dues yet?

If Tech has a shocking upset against an opponent this year who will it be?

We've played a team and lost 11 out of the last 12 years. They start the season ranked #5 in the Coaches' Poll, with us unranked and without a vote. Those are pretty steep odds at this point.

How much do tickets go for on the street 10 minutes after kick off for VT? uga? Pitt?

uga: They don't, all of the tickets will have been sold and redeemed.