Our Countdown to Kickoff continues today with a look at our matchup against our in-state rivals.

How much needs to be said here? CPJ is the only Tech coach to record a win over Mark Richt, but that happened almost 5 years ago and the results haven't been improving since. Last year they were an offensive juggernaut, extremely balanced while also extremely powerful. 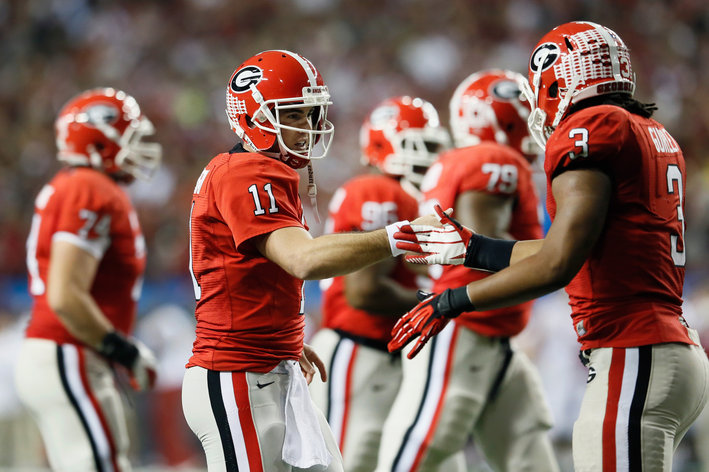 The defense was incredibly impressive too, but inexplicably struggled with stopping the run for a defense who had 7 players drafted. If there's a question mark in Athens this year, it's the defense, who has some big shoes to fill at a number of positions. In fact, it's the depleted defense that I'm predicting they lose their first two games against Clemson and South Carolina -- even though they may not lose any games between then and our matchup.

If this game were week 1, I'd predict that we could take advantage of their lack of experience and really abuse them on the way to a 10-point win. However, with the game as late in the season as it is, their defense will be comfortable and their offense rolling. It pains me to say it, but I have a hard time seeing us beating uga...again. The key to victory for Georgia Tech will probably be the play of Aaron Murray. If their offense is rolling and scoring a bunch of points, we're going to struggle to keep up. If Murray is injured, unfocused, or is just "off", Tech will have a shot to win. In any case, I don't see Tech hitting 30 points against this defense in Week 12, meaning to win it will need to be a low scoring game.

The defense is firing on all cylinders, and Aaron Murray is playing as well as we've come to expect. If the dogs can score 30 points, it's going to be nearly impossible for Tech to keep pace given the high-quality uga defense.

They are able to score a lot of points to keep pace with uga's high-octane offense. Any defensive stops, especially the creation of turnovers and three-and-outs, will be huge. The longer that they can keep uga's offense from getting into rhythm, the better.

I'm going to be perpetually pessimistic in this rivalry until the tides clearly turn, and this year is no exception. Is this the year that CPJ puts another one in the "W" column against Mark Richt?