Our Countdown to Kickoff rambles on today as we look at the Jackets trying to avoid the curse of Charlottesville. 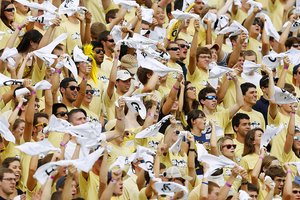 Here's what I know -- Virginia wasn't very good last year, and shouldn't be any better this year (especially their offense). Georgia Tech slaughtered them last year by a score of 56-20, with Virginia scoring a touchdown on the last play of the game to turn a 6 touchdown game into a 5 touchdown game. However, that was at Bobby Dodd Stadium. A year prior, the Jackets went to Charlottesville with a 6-0 record to take on a 3-2 Virginia team on their Homecoming and looked absolutely awful, managing 2 offensive touchdowns and losing 24-21. Weird things happen up there. When Tech won in Charlottesville in 2009, you'll recall that it was their first win there since the National Championship season of 1990.

Virginia loses their top 2 QBs, 2 of their top 3 RBs, 2 of their top 3 TEs, their first-team All-ACC LT, 3 of their top 5 D-Linemen, their top 2 LBs, and their top partridge in a pear tree. This team struggled for much of last year, and doesn't figure to be much better this year. Their best units will likely be their wide receivers and secondary, with a good chance of the O-Line being really solid too. The issue will be QB and the front 7, where they have talent that happens to be extremely undeveloped. RB Kevin Parks will be dangerous behind their O-Line, but one has to wonder whether their receiving corps will even have a shot to get the ball from a set of very young QBs.

They can establish the run and slow Tech's pass rush enough to get the ball to their receivers. They need to avoid mistakes on offense and stop the Yellow Jackets from gaining momentum early (especially on offense).

They are able to execute their offense without a significant hitch, especially early. They will also need the secondary's performance to be strong if they are to commit a lot of guys up front to slow down Kevin Parks behind his talented O-Line. The defense will benefit greatly from forcing the Virginia offense to be one-dimensional.

I'm calling the 2011 loss a complete fluke and trusting our defensive talent to manage the opposition here. This could easily get out of hand as it did last year, but that's extremely wishful in a road game. Was 2011 a fluke, or was last year the fluke? Which one will this game more closely resemble? (Aside from scenery, of course.)