Our Countdown to Kickoff continues today by looking at my predictions for who will be the best defensive players and specialists in the conference.

Attaochu's move to Defensive End will allow him to focus on what he's really good at and could result in him being the ACC's sack leader. From there, the major candidates are Kareem Martin, James Gayle (Virginia Tech), and Mario Edwards (Florida State). Edwards will only be a sophomore while the other three are all seniors ranked as top 10 prospects at their position by NFL Draft Scout. I'm taking Martin based on his higher ranking, but would not be surprised at all to see Gayle at the top of the mountain come the end of the season.

Jernigan will be a junior playing on a highly talented Florida State line (what's new there?), while Donald is a senior who displays a good combination of speed and strength and is listed at #11 among DT's in preseason draft ratings. Nikita Whitlock of Wake Forest was voted preseason all-conference by the media, but his 5'11", 250lbs frame is, to me, too small to be considered an all-conference type of player. Maybe he proves me wrong, but from what little I know at this point I can't have high expectations of him. (I have to confess, I was tempted to include Gotsis here based on his production as a freshman and his apparently absurd abilities in the weight room, but I couldn't justify it to myself when there were a number of guys being looked at as NFL talent ahead of him.)

Nealy might be one of the more under-the-radar guys in the conference -- he was fourth on the team in both tackles and sacks last year, and third in interceptions. Overall he's a very versatile weakside linebacker who should shine under Ted Roof. Christian Jones is currently the #5 OLB in this Draft class according to NFL Draft Scout -- even higher than Attaochu, who's still listed at OLB and checks in at #7. Jack Tyler isn't getting much NFL love, but my assessment of that would have to be his shorter, slimmer stature when it comes to Middle Linebackers. Tyler led the Hokies last year in Tackles and Tackles for Loss, and both by a considerable margin. His mobility makes him dangerous, and I think that he'll creep up into NFL discussions this year if he can prove that size is not an issue for him.

I know, I know. I think Duke will have an All-ACC player, AND I think he'll be on defense. It's a little weird. Cockrell enters his senior season with 9 career interceptions, and is rated as the #9 cornerback in the upcoming Draft class. Exum, on the other hand, is coming off of 5 interceptions last season and is rated at #2 in this year's Draft. (And they say the best defensive players end up in the SEC...) Lamarcus Joyner will be in the race here, but I see him and his skillset as more appropriate for safety.

Check Out My Offensive All-ACC Selections! 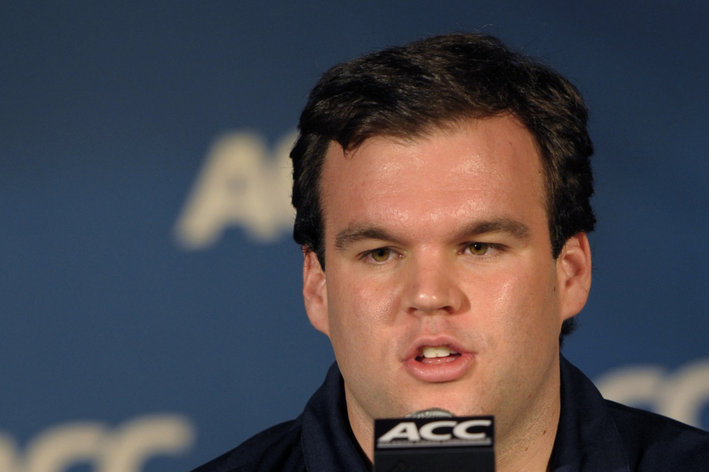 Boston is a big-time safety, with ideal size (6'1", 205lbs) and the skills to back it up (4 INTs last year including a TD @ Virginia). He's rated the #2 Free Safety in this year's Draft class. Hendricks led the Panthers last season in tackles and INTs and should be a major playmaker for them. (Before you get shocked about Jemea Thomas not making my list and not even being in the media's top 4, remember that he's switching from safety to cornerback this fall -- where he'll be in a larger pond of players. The same is true for Florida State's Lamarcus Joyner, who is a highly-rated safety but will spend the fall playing cornerback.)

A guy who seems like he might be a 7th or 8th year senior by now, Catanzaro is by a longshot the class of the league at kicker. There were 64 votes split among the top 5 vote-getters in the media's projections, and 41 of them went to Catanzaro, in case you're looking for an affirmation of where he stands among ACC kickers.

Trust me, I put a lot of research into this one. Two reasons Monday gets my vote here: first, as a freshman, he averaged nearly 45 yards per punt, which certainly seems like a long way and put him at 18th nationally. Second, as a player for Duke, he may well be used early and often.

Come on, you didn't really think you were getting out of here without a Duke joke, did you?

As badly as I want to pick my own guy here, and as good as Jamal Golden is at running back kickoffs and punts...Stefon Diggs is something else. Kid's simply a freak athlete, and I think this is the type of position he was made to play. Now, I do think that Golden will have another big season at returner, and I don't think that this race is as far apart as the media's voting made it seem. The other player here will be Duke Johnson of Miami, who held the second-best kickoff return average nationally last year, but did not return punts (in my opinion, his undoing in this award).