Today, our Countdown to Kickoff continues as I'm taking my picks at who will make the all-conference team on offense this fall.

With E.J. Manuel having left Florida State and Sean Renfree having left Duke, the only considerable competition here will be Logan Thomas at Virginia Tech. However, I can't see Thomas making a comeback that would unseat Boyd after last year's disappointing results. This one is Boyd's to lose.

If only allowed to pick one, I'd say this comes down to Johnson, James Wilder Jr at Florida State, and Shadrach Thornton at NC State. However from what we know of all 3, we can be assured that Johnson will go for 1,000 yards if he stays healthy -- something nobody else can promise at this point.

No, fullback is not a traditional All-Conference selection. Yes, I did it to shamelessly recognize one of our players. Yes, you're gonna have to deal with it. COME AND GET ME, COPPERS.

Watkins will be returning from a down year after an All-American freshman year, while Diggs was named an All-American by some last year in the "Specialist" category. These two guys are far and away the most talented at the position in this conference.

The only TE in the conference last year to manage 600+ yards receiving, he'll play a major role in Larry Fedora's pass-happy offense. His biggest competition will be Nick O'Leary from Florida State...yes, the very same.

Check Out the Media's All-ACC Selections and More! 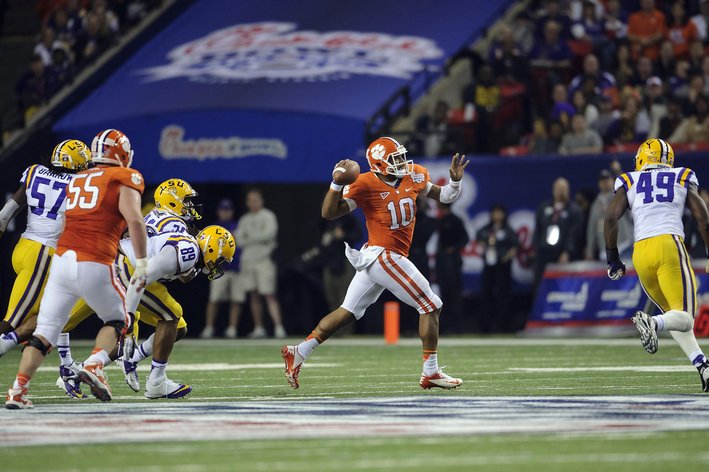 Compare my selections to the actual selections from the ACC's Kickoff.

The ACC this year will be home to three of the current top 7 offensive tackle prospects according to NFLDraftScout.com, with the third being Seantrel Henderson of Miami. Hurst seems to be a consensus pick here who borders on All-American status. I picked Moses over Henderson purely because a) I think a 6'6", 325lb guy will move a little better than one with another inch and another 20lbs, and b) I don't really want another Miami player on here.

"Ha, look at this homer." Alright, fine, Jackson is a bit of a tough pick here against some others in the conference. I do think that he has a lot of potential here though, and he was picked third in the All-ACC voting before the season. So I'm sticking to my guns here. Also, Jackson is one you might recall who was a longtime Georgia Tech commitment before taking a last-minute visit to Tallahassee, causing his offer to be pulled. Oh, how close we were...

I really want to pick Jay Finch here, and I do think that he'll end up one of the best centers in the country, but Stork is listed as NFLDraftScout's #4 prospect and was the media's selection here. Long story short, Florida State looks to have a powerful offensive line this year.

Am I a shameless homer? Will Sims, Jackson, and Finch have All-ACC caliber seasons? Who have I missed from the Flats?