You asked for it, so now you're going to get it.

Share All sharing options for: UPDATED: The "Pizza Dip" Story

The day was November 26, 2011. Given the time of year, it was surprisingly mild out -- mid-60's, cloudy, and balmy as I recall it. It just so happened to be the Saturday after Thanksgiving, which can only mean one thing -- Georgia Tech's campus was full of Clean, Old-Fashioned Hate. I decided to do the day right and start tailgating early in the morning. Got dressed up in my gameday attire (visor, white button-down, gold bowtie, navy blazer, slacks, Sperrys), packed up my booze bag and was ready to rock. At 7:30, I swung by and picked up a friend so that we could go meet a group of mutual friends in the Nanotech Parking lot.

We get there, and the drinking commences. (Whiskey-Coke was the drink of that particular morning, as I recall. How else would one polish off a college football season?) We're all socializing and having a good time. Someone brings out an apparatus that pumps water through a plastic tube that goes through Buzz's nether-regions and spits out water onto the head of a plush Uga doll. Classic. 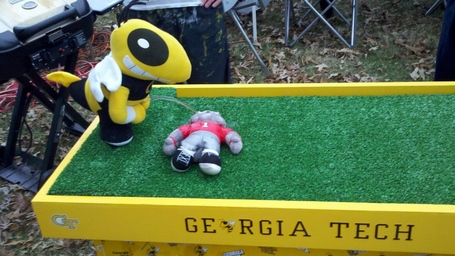 As with any tailgate, there are refreshments. Community beer, whiskey, rum, and soda. I don't take any of that -- I'm no freeloader. There's food there -- people have dips with crackers and chips and such. One particular kind was a pizza dip -- layers of cheese, marinara sauce, and pepperoni. Quite greasy, but oh-so delicious. Definitely the hit of the tailgate.

This group of friends I was tailgating with had invited other folks too, and I spent time talking to one particular guy who was an Aerospace Engineer who was graduating in a few short weeks. Nice guy, want to say he was one of the Goldfellas. Not Greek, but still fairly sociable. Of course there was plenty of time chatting up the ladies at this tailgate, but they're not really relevant to this story, sadly.

Of course there was plenty of time chatting up the ladies at this tailgate, but they're not really relevant to this story, sadly.

As the tailgate went on, beer pong was played along with plenty of cornhole. After a while, someone suggested we play Thunderdrunk -- a favorite gameday tradition around my house. The rules are simple: stand in a circle, play "Thunderstruck" by AC/DC really loud, pick someone to start drinking, drink until the next time the word "Thunder" is said, at which point you pass it on to the next person in the circle...continue until the song is over. (Sounds stupid, and yeah, it kinda is...but it's really fun for immature college kids.)

So we get in a circle and it's on. Thunderstruck is blaring, and my turn to drink comes. I partake in my particularly strong Whiskey-Coke, but after that first drink I decide that playing through the entire song would not be in my best interests -- I don't need to put down that strong of a drink that quickly, especially with the progress I'd already made. To drop out of the game, I step back from the circle and take a few steps away. The kid I met earlier stepped away also -- he'd been tomahawking Fireball (or maybe a cheaper, more rank version). I look over and see him do this, and think nothing of it.

However, in the three or four seconds that I'm looking at him, he rears back and PROJECTILE VOMITS ALL OVER ME. What's worse? HE WAS EIGHT FEET AWAY FROM ME. (That part was actually semi-impressive.) Now, understand that when I say "all over me", I mean it. It was on my shoes, my pants, my shirt, my jacket, and EVEN MY VISOR. Yes, from eight feet away, this kid somehow managed to cover me in vomit from head to toe.

(You may be wondering where pizza dip plays into all of this. I'll just let you connect all of those dots yourself.)

So here I am, wearing full gameday attire that's covered in vomit, a solid mile and a quarter walk away from my North Avenue apartment. My drink has been ruined (also had vomit in it), but I clean out my cup (thoroughly) and make myself a strong Whiskey-Coke from the community materials before starting the long, nasty trek home. Keep in mind, this is about 9:30 or so before a 12:00 game -- prime time for families to be getting to campus to set up and tailgate.

Never in my life have I gotten so many condescending looks over a mile-plus walk. I was unbelievably embarrassed. The worst part was, I was walking around covered in vomit THAT WASN'T EVEN MINE.

Never in my life have I gotten so many condescending looks over a mile-plus walk.

Upon getting back to my apartment, the other fun part happened -- calling my parents to try and figure out what to do. They were headed down to tailgate and I thought they could take my stuff to the dry cleaners. In case you've never tried it (hopefully that's the case), it's not really easy to call your parents and actually convince them that someone else threw up on you...I'm not sure they believe me to this date.

In any case, I showered off, soaked my clothes, re-suited up (no blazer, but gold shirt and white necktie), had two more drinks, resumed tailgating (this time at the fraternity house), told this story four or five times, and then went and watched Tech get beaten by two touchdowns on their own turf.

Just remember, you asked to hear this disgusting, humiliating tale. The things I do for you readers...

I should probably clarify that upon all of this happening, I didn't give an angry, animated reaction. I was disgusted, but didn't want to make the guy feel bad about himself. I basically said "Don't worry about it" and never heard from him again.

That's right, I heard from him for the first time since the incident this morning, when I received an email from him (his name shall remain anonymous). The email said the following:

As the goldfella who was the terrible person in your story, I want to once again apologies (maybe first again, I'm not sure if my apologies that day were understandable). I've always wondered who that was, because you deserved to deck me then and there. About the only thing I remember from that morning was your extreme calm (from the perspective of a wasted person). If there is absolutely anything I can ever do for you, let me know. At the very least, I owe you a few dozen beers.