Today, FTRS brings you a new feature in its weekly "Mailbag" post, where we answer questions posed by you! This week's edition features conversation about local craft breweries and Joey's family.

Share All sharing options for: Mailbag 7/1 UPDATED with More of Your Questions: Temperature Gauges, Craft Beer, and Red Birds

"Danny Hall? Say it ain't so Joe! What controversy is brewing related to GTBB?" - DressHerInWhiteAndGold

"At this point, if you look at it from a "Danny Hall vs. the field" perspective, certainly you take CDH. But is it wrong to expect to see our consistently top 10 recruiting classes have great regular and postseasons?" - Buddy Smiggins

Joey: This one's tough, because I don't want to start implicating things or starting rumors, while at the same time it's tough to ignore the results (in the postseason, specifically) in recent years. This isn't going to be a short discussion, so look for an article on this subject Wednesday.

"Which craft brewed beer (or mixed drink, if beer's not your thing) best represents your experience(s) of Georgia Tech? I'd probably pick a beverage each to represent football, student life, and life as an alumnus." - GT_Jason

Joey: For student life, I'd say the best craft beer to represent it is Sweetwater 420. I say this because while it's fairly bitter, everyone tends to love it after they get used to it.

For football, I'd have to say that Dogfish Head's 90-Minute IPA represents the experience pretty well. It's not for everyone, and it can definitely leave a bitter taste in your mouth, but those who learn to love it will never lose that appreciation.

For life as an alumnus (my personal expertise), I'm going to go with Monday Night Brewing's Drafty Kilt Scotch Ale, a dark ale that's got a very enjoyable flavor and, with a 7.2% ABV, turns out very rewarding.

"What outcomes of this football season will leave CPJ on the hotseat? That is, clearly if we went 0-12 he'd be fired, and if we went 12-0 (or 14-0) he'd be safer than Julio Lugo in the 19th inning of that Braves-Pirates game a couple years back. But where is the middle ground, in your opinions? I would say anything from 7-5 on down would be definite hotseat territory, with him probably getting fired for 5-7 and below." - evanseeds

Joey: CPJ's had quite a bit of rope for a while now, but you'd better believe that it's shortening. When he came in, he inherited a lot of talent from Chan Gailey's final recruiting class. Once they left, the team was left in shambles and a lot of rebuilding had to be done. Now that the team is comprised entirely of his guys, it's going to be up to him to show that he can build a program, successfully pick a defensive coordinator, and achieve success. I think grumblings start happening at the 8-win mark, and every win short of that leaves the seat a little warmer. As you suggest, 5-7 or less (even 6 wins will end the bowl streak of 16 years -- we need 7 wins with two FCS teams on the schedule) probably warrants a firing. However, if this team wins 9 games (as I think they can and will), the seat will be cooled as the team shows significant improvement over last year.

"Also, you're going to have to talk a little more about the Louisville comment. What's up with that?" - jchens_GT

"Why do you also support Louisville?" - T-Hermonious Rex

Joey: So here's the deal on that. My father was born and raised in Louisville (the St. Matthews district, I believe) while my mother was born and raised about an hour from Lexington, KY (in Mt. Sterling). Before moving to Atlanta (when I was 3), all my parents ever knew were Louisville and Kentucky. As could be predicted, my Dad's family was a bunch of Louisville fans while Mom's family were all Kentucky fans, meaning come basketball season I had to pick sides. I'm my Dad's son, and screw the SEC, so naturally I went with the Cardinals and they've been my second team ever since. I agree with all of the media hype around them this season that says they had better go undefeated (their regular season schedule is pathetic), but also won't be surprised if they find a way to screw up one or two games along the road...things just sorta happen that way to my teams.

"What can you tell us about [Coach Brian Cook's] offense at Cal Poly? I’m sure we’ll have to wait and see on this, but has there been any indication thus far as to how much he may actually influence CPJ and our current offensive scheme?" - jchens_GT

Nate: Great question, Mr(s?). JChens. The base formation is more or less the same as the flexbone, but with some slight alignment tweaks: 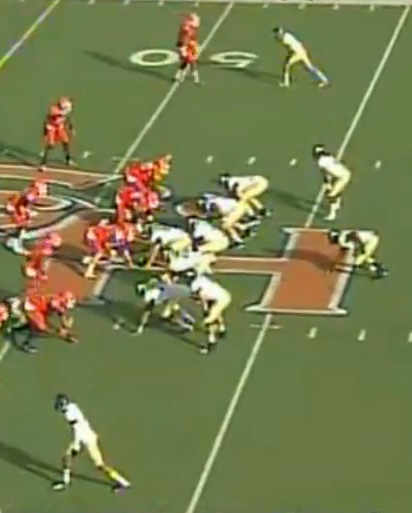 see how the AB on the top of the shot is out of alignment from the other one at the bottom? Tech doesn't normally do that, our base form has them both aligned equally. On this play, this guy turned out to be the motion man, but then that gives the D a key which side will be the strong side and which will be the weak, so I don't think we'll be seeing too much of that. There is some pretty whimsical stuff in CBC's repertoire though, such as this diamondback formation: 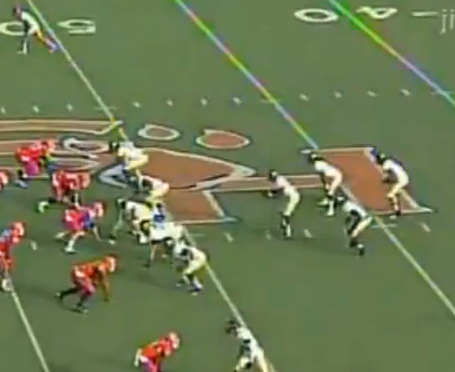 I think CPJ might like this enough to pull this out once or twice during the season. It's deceptive, the handoff is almost immediate, and the BB has plenty of time to build up speed and hit the hole or follow one of the other blockers to the outside. It's quite splendiferous, one might say. So yes, I think we could easily see some new stuff courtesy of Mr. Cook.

"Is there any possibility that GT will get Russell Athletic to make us some good looking uniforms that the majority of our fan base will like/love?" - Lake Park Jacket

I don't think it's really possible for such a large group to get behind a single design or set of designs. Oregon's fan base is all in for their unis, but that's only because they expect them to be absurd and as long as that expectation is fulfilled they're happy. I think the only way we could really make everyone pleased is to go to white helmets and gold jerseys, but the players would hate that. All these kids nowadays (says the 24-year-old) like flash and designs and if you don't have that then you're behind the times. So I kind of hope the uniforms stay the way they are.

What are your thoughts on these questions, Tech fans? Where did we get it wrong?