A Look at the Numbers Behind a Georgia Tech Touchdown Drive

Taking a look at how our drive expectations change on a play by play basis.

Share All sharing options for: A Look at the Numbers Behind a Georgia Tech Touchdown Drive

This week I wrote a post at Football Study Hall detailing the outcome percentages for drives in college football by yard line and down. So if you have a 1st and 10 at your own 40, I can tell you how often an average team against an average defense would score a touchdown (just under 30% of the time). Percentages are nice and all, but what does this actually look like on a specific drive? Well, I'd like to show you.

I wanted to pick a drive that I remember as being fun and exciting without it being a comeback late in the 4th quarter or half, so the numbers behind everything wouldn't be skewed by a late drive in a close game. I chose to take a look at Georgia Tech's first 4th quarter score against UNC (one of the most entertaining games of the year) that featured big plays by Vad Lee and Orwin Smith. Let's go into the Play by Play:

Click the hyper link on "1st play" to watch the play

The following table shows the outcome percentages of this drive BEFORE the 1st play.

I am not going to do a film review, I just want to show you how the numbers change throughout a drive. Having said that....Morgan Bailey should have left his double team and gone to the second level to block the linebacker a second earlier, opening up the lane for Vad. Vad made the right read. BUT I DIGRESS. The numbers says this was an overall negative play, our chances of getting a touchdown dropped by about 4 percentage points and our odds of punting the ball went way up.

Drive Percentages before the play:

And now here are the changes after gaining 3 more yards to bring up a 3rd down.

We just keep getting closer and closer to punting the ball, don't we? You kind of have to just give credit to the UNC DT tackle here, Devonte Brown. He climbs over who ever is trying to cut block him and takes down Sims.

And this is the change after Vad goes into the phone booth to come back out and gain us 39 yards.

This is a huge play. Our odds of scoring some points go up 45 percentage points. I can't help myself, this is a designed QB run, Vad rolls out to his left and no one even pretends to run a route. Luckily the UNC guy doesn't even try to wrap up and Vad just runs through him like he wasn't even touched for a huge gain.

On the play Laskey ran for 7 yards. I think a faster B-Back turns this gain from a 7 to a 14 yard gain. As soon as he sees the defender he just squares up and runs into him, falling forward for two yards. This is my biggest complaint with Laskey. On THIS PLAY, so no not all plays, but this play there is a lane for Laskey to cut away from the defender and get to the safeties. A faster running back wouldn't think twice about going for this cut. Maybe he doesn't get the cut and the defender makes a tackle at 4 yards and not 7, but Laskey seems to know he can't make the cut, and is just gonna run till someone stops him. In our offense anyone could have gained 7 yards on this play, I'm hoping we can find someone who knows he could have gotten 14 instead.

Anyway here is how that affected our chances:

At this point we are about as likely to attempt a field goal as we are to score a touchdown. Either way, as long as we don't turn the ball over we should have a good shot at scoring some points.

Again, I said on the previous play I noticed, not on all plays. This time Laskey picks his head up, sees a crease and goes for it. Way to run.

It is interesting that now odds of kicking a field goal have actually gone down, but our odds of scoring a touchdown have gone wwaaayyy up. This 9 yard play is almost as important as Vad's 39 yard run.

Our wide receiver and our running back try to block each other. Of course we lost yards on this play. I count three things to nitpick on this play.

We are going to miss Orwin's speed next year, he just ran away from the only guy who could have made the tackle.

And now, here it all is in one graph: 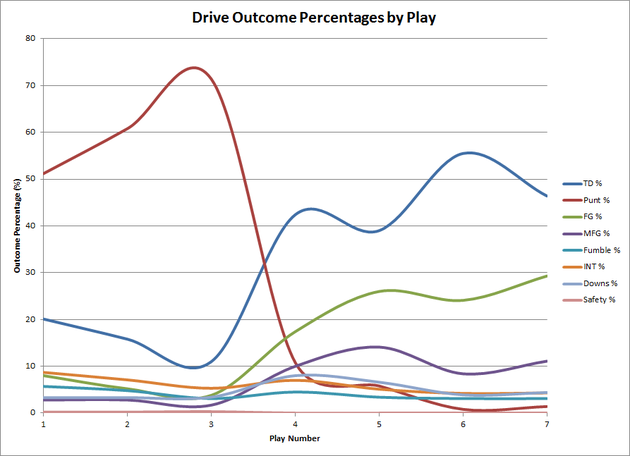 I'm not really sure there is anything special to learn here, it is just a fun exercise in learning more about college football, and an excuse for me to re-watch the entire UNC game again. Thoughts, observations, questions? Put them in the comments.