CPJ 5 years later: The Great, The Good, and The Ugly

Taking a look back at the first 5 years of Paul Johnson's tenure at Georgia Tech.

Share All sharing options for: CPJ 5 years later: The Great, The Good, and The Ugly

The end of last season completed the first five years of Coach Paul Johnson's tenure at Georgia Tech. I thought it would be a good time to take a look back at how he has done over the years. This might get a little long but I hope to put out there everything I could think of on how to measure his performance and identify some things he has done well and other things not so much. 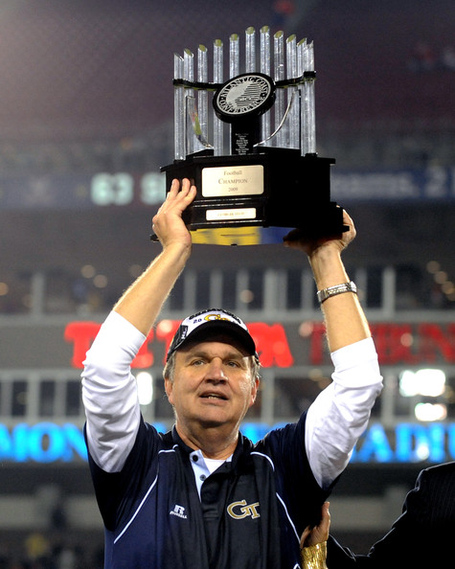 CPJ won us our first outright ACC Championship since 1990 in his second season here. He took us to another ACC Championship game again this year. Sure, we didn't belong there but we almost won the damn thing with Tevin Washington as our Quaterback.....just think about that once more. His 2009 team had the best offense in the ACC over the last 6 years. Here are our F/+ Ratings for Offense since 2008 along with our NCAA rank (0% is average and positive is better)

1 elite Offense, 3 great Offenses, and 1 good Offense. It's been awesome. And, there is also this and this and that time he told Tech fans to punch Georgia fans in the mouth and any other thing he has ever said on his radio show has generally been awesome. And that time Paul Johnson walked by my fraternity house and in his first shot chipped a tennis ball from across the street through our open 2nd story window, which none of us had been able to do for an hour (alcohol may have been a large reason why we couldn't). He is The Man.

Here are the records of all 12 head coaches that were coaching in the ACC in 2008 when Paul Johnson took over.

Oh and I threw in Dabo just for good measure. What can we learn? Uh, CPJ has done a pretty good job. Only 5 coaches remain from 2008, and two of them are coaches at Duke and Wake Forest. And honestly, I would absolutely rather have CPJ than Dabo Swinney. Dabo has done a great job leveraging Clemson's resources, but I wouldn't like to have him over CPJ as my head coach. An average record of 8-5 with bowl games every year? Well, lets let Larry take it from here:

Here is a similar table, but this time with the 5 year records of all schools, regardless of coach.

4th most wins since 2008 of any ACC School. Is that successful? I guess it depends on your expectations of Georgia Tech's program, which is an article for another time. But again, I think that is a good performance.

I've got 3 issues which I think belong in the "Bad" Category.

"I'm calling high school coaches ... writing, tweeting, the direct messages and the Facebook stuff," Richt said, explaining his May responsibilities."(I'm) trying to get guys through that avenue to call, getting meaningful conversations with kids, have conversation with coaches, and invite coaches to 7-on-7 camps. I mean, all of that kind of stuff."

And here is CPJ's response to the same question:

"Truthfully, the assistants are doing most of the work in May. The way it's set it up, the head coaches cannot leave campus to recruit in the spring. You spend your time visiting with the guys on unofficial visits on Saturdays. We get one phone call (as a head coach). That's it. Even in the fall when the season starts, we get one day (for contact).

Mark Richt is an excellent recruiter, and look at all he says his responsibilities are in the spring. I think CPJ's whole mindset about recruiting is captured in this quote. It has got to become more of a priority if we are going to get better.

3. Special Teams responsibilities. This is almost a combination of the first two points. We just hired a special teams coordinator last year? What a joke.

If you are asking me, I love having Paul Johnson as our head coach. I think his personality is a perfect match for our fan base, I think he understands Tech's program and it's traditions, and I LOVE watching the spread option. I could watch it all day. I think there are some things he could have done better so far, but I also believes he recognizes this and is making steps to improve it. The only thing worse than fixing a problem late is not fixing it at all. I don't believe that CPJ is on the hot seat and I am really excited about this team in the fall. I know I can say I have been damn proud to call CPJ our coach over the last 5 years.

What do you guys think? Let me know in the comments.

Also my opinion doesn't reflect all of our wonderful writers at FTRS, so lets hear those other opinions.

Edit: Didn't save some of the last updates I made, hope it is better now.