Georgia Tech BBall Recruiting: It's Not Over Yet!

With the transfer of Julian Royal, Tech suddenly has a third opening for its 2013 recruiting class. Who's still an option for the Jackets to fill that void?

Share All sharing options for: Georgia Tech BBall Recruiting: It's Not Over Yet!

We currently have two commits, Travis Jorgenson and Quinton Stephens, along with Solomon Poole who completed his requirements early and entered the team midseason. We will have another spotlight article to highlight Travis and Quinton later. This is another PG and SF to our roster.

Here is a image of our current team board with the next three years of recruits currently. Data courtesy of VerbalCommit.com. 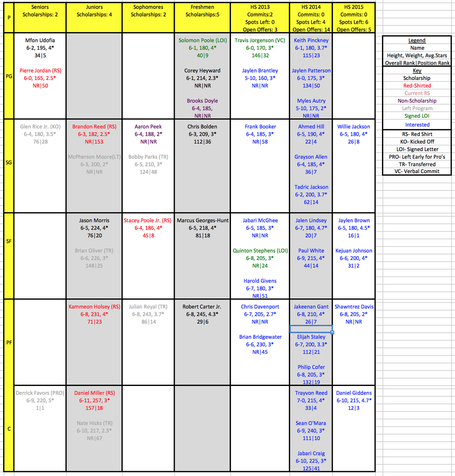 Below is the current breakdown with the addition of our commits for the 2013-2014 season.

I assume that we'll see one of the three PG’s contributing as a SG during the season. Stephens needs to add some serious weight to bump with stronger PF’s, but I see Gregory utilizing him similar to Carter Jr., where he saw a lot of time in the midrange area on offense. I also see Stacey potentially moving to a shorter PF position because of his experience, but his height is definitely limiting him.

We currently have 5 offers out and are considering 2 other players to that list. Below is a brief breakdown of the players that Tech is considering adding for the upcoming year. It's a lot of info, hope I don't lose too many of you!

Players are listed by caliber.

This is Tech’s best current recruit in my opinion, but he’s being recruited by Miami and lives there too. He is a double-double guy on most nights, being strong inside and out. This would be a huge pick up for Tech.

Conclusion: I don’t see a 3/4 Star recruit from Miami not giving Miami a decent look. He is a very versatile PF who can make baskets all around the court. His diverse play would be a great aide to the Tech offense while contributing with height on the defensive side of the ball.

Jaylen Brantley is a 5-10 PG from Notre Dame Prep. He is a stud, competing with one other player as the Top Point Guard in Massachusetts. Notre Dame Prep is known for developing high caliber college and NBA players, and I know this guy has gotten some experience in some competitive play.

Conclusion: Reminds many people of Chris Paul, but he will need to get a lot quicker to validate that accolade. He needs to get bigger, but nothing some weight training can’t fix.. Basically, do we need ANOTHER Point Guard?

Jabari McGhee is familiar with Atlanta, being from Albany, GA and playing on Atlanta Xpress AAU team. Jabari is a 6-5 small forward who dominates both ends of the floor. He has a knack for the ball on the boards.

Conclusion: He’s a hard worker. He might not be as explosive and threatening on offense, but his tough attitude on defense would make him a great asset for the Yellow Jackets.

Harold has a TON of potential as a player, being a 6-7 Small Forward. SMALL being the key word there, even if he is 6-7. There is not much on this kid, but I think he should definitely be getting more news. He has been a huge contributor for Quality Education Adacemy. Listed as a lot of interest between him and Florida, I do not understand why he doesn’t look at Tech more seriously. His size would be such an asset here.

Conclusion: I don’t see this guy coming to Tech, but wanted to cover him anyway. Of course, there's always a chance, but I think that he hasn’t gotten a ton of coverage. I honestly don’t know why Florida is stressing him so much because they already have two strong SF’s who see a lot of playing time. That being said, he would be an asset on the offensive front, but needs to get some stronger defensive skills.

Chris is an Atlanta grown, 6-7 PG from Eagles Landing Christian Academy. He travels with a Florida AAU team, the Florida Rams. He’s a quicker PF, who plays very strong defense and makes plays on offense.

Frank is a 6-4 SG from Augusta, GA. Due to his height, he is definitely a combo guard. He wants to score, regardless of location on the court. He will pull up and take a shot outside the arch, but can also drive to basket and make a play down low.

Conclusion: Georgia Tech could really benefit from a player like this. He plays the drive and kick very well and throws defenders off with so many options. His ability to play PG, SG, or SF really helps any team when trying to fill spots.

I LOVE this guy! He is an undersized PF by height, but has the body of a tight end.. Literally! He is also a 3 Star TE, being recruited by some small name colleges like LSU and Alabama. While he is getting scouted for football too, it seems that he will be going somewhere for football. He is what you would think of when you put a TE under the basket.. Strong and explosive. People compare him to Glen Davis, which worries me because he has basketball and football scholarships from LSU.

Conclusion: Bridgewater would be a great finisher for Tech. He would work hard on the glass to get everything in sight. He is a shorter PF, but I think that if he developed his mid-range ability, his height limitations would not be an issue.

**This list is odd to me because there is a lot of carry-over. If you take a basketball offer, you can’t play football for 2 years from what I understand. I do not know what these other teams are thinking, whether he plays one sport or two.**

He looks to be leaning toward basketball

I know that is a lot of info, hope I didn't lose too many of you. Regardless of who Gregory picks, look for something in the news soon about a new pick up for the Yellow Jackets. Hopefully we can move forward and grab one more strong player for next year.

What kind of player do you think the Jackets need?