The State of College Football After What We Learned Today

It's been a very frustrating 2-week stretch for Tech football fans, laden with de-commitments. It's time we take a step back and look at the big picture though, and examine what the past two weeks means for the game as a whole.

Share All sharing options for: The State of College Football After What We Learned Today

The concept of a "runaway freight train" describing the SEC's ever-increasing dominance of college football is pretty accurate. Nothing will ever stop them until the NCAA changes the rules surrounding how they do what they do.

The lifeblood of any college football team is their ability to recruit. Recruit really well, and you're in good position to thrive as an organization. Don't recruit well, and you'll fall down the food chain like a brick.

The problem is, when on the poor end of things, it can become a vicious cycle only capable of being broken by an incredible coach (a very rare breed) who can get players to perform more than anyone ever expected them to. Recruit poorly, and you'll probably perform poorly -- and it's hard to want to play for a program that performs poorly.

These kids all tell us they're "solid" to Tech, and have convinced themselves that they are, but have had other schools recruiting them since their commitment to Tech. (Keep in mind, the other schools are likely turning up the heat on our commitments mostly because they've lost commitments of their own, but also because some kids were undiscovered by most before committing to Tech.) They listen enough to start thinking they might just take one more visit...what harm could that do? Then they take that visit, and are amazed at how nice campuses are, how beautiful their women are, how big their signing bonuses stadiums and weight rooms are, the teams they'll get to play against... 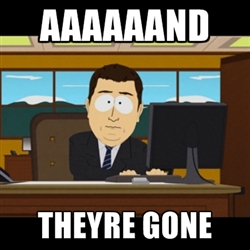 All this basically to say that the system is broken. The recruiting game that the league is currently subjected to is designed for the rich to get richer. It's pathetic and downright sad that our program is having to keep certain recruits secret, so that other programs won't come in and swipe them up. We have no way of evening the playing field when we're not one of the top programs or in the top conference in the country, when we play by the rules of how many we can sign, and keep players on the team for 4-5 years regardless of how well they perform.

It's an uneven playing field. Maybe that's just life, but we're in a position where, if nothing changes, we'll forever be fighting an uphill battle when it comes to recruiting. We watch uga and Alabama sign 30+ guys per year (somehow this works out mathematically to fill an 85-man roster, though I've yet to figure out how), while we've yet to sign more than 23 under Paul Johnson and have only signed over 20 twice. We watch them dogfight over the nation's top prospects, only to come and snatch our top prospects up once they realize they can't have all of the prospects that everyone wants.

The main issue now is that we're moving in a direction that would legitimately put the SEC in a place that's untouchable by the rest of the country because they'd be in a different league of talent altogether. Without a change in rules that swings the balance back into the league, the game as we know it will be severely compromised. This year's top 10 recruiting classes according to Rivals featured 6 SEC teams, the top 20 featured 10 SEC teams, and only Missouri is outside of the top 30 (for reference, the ACC's best recruiting class is Florida State at #11, and only Clemson at #14 joins them in the top 20).

At the end of the day, if college football is to continue as the game we know and love, it's going to be caused by changes in recruiting rules that benefits teams who very effectively recruit before other teams are able to jump in and grab their players. An early signing period is the only way to derail the unstoppable freight train that has become the SEC.

Anyone feel similarly, or am I just complaining and throwing a hissy-fit?