Duff'd It! Rankings and other Accolades, Weeks 13 and 14

BRINGING YOU TWO WEEKS OF DUFF'D! FOR THE PRICE OF ONE. (ALSO, ALABAMA LOST.)

Share All sharing options for: Duff'd It! Rankings and other Accolades, Weeks 13 and 14

5. Texas A&M. LSU's Stadium is called Death Valley because that's where the Tigers' opponents' dreams go to die, and that's exactly what Johnny Manziel's Heisman dreams did after throwing one touchdown and two picks against the Tigers. I don't know what dead Heisman hopes taste like, but LSU fans do - Heisman hopes coated in cayenne pepper and deep fried.

4. Michigan. Brady Hoke is a Michigan Man, and everyone knows you're not a true Michigan Man until you lose to Iowa, preferably after taking a 14 point lead and then taking the second half of the game off.

3. Oregon. The Ducks did their normal thing of setting things on fire on offense (they gained a nice 508 yards on Arizona), and managed to only score 16 points for all that effort, thanks to two untimely turnovers and a failed fourth down conversion deep in Arizona's territory. You're in the desert, Oregon. Next time be less like a duck and more like a vulture. But not too much. We know what you normally do to your opponents; you don't need to scavenge their remains too.

2. Baylor. Let's take a look at how flaming Baylor bear car is doing after losing to Oklahoma State and - NOOOOOOO FLAMING BAYLOR BEAR CAR YOU HAD SO MUCH TO LIVE FOR!

RIP, flaming Baylor bear car. Hope you're setting all the highways on fire in Baylor bear car heaven. Here's hoping we can see your ghost smiling over a BCS bowl game in January and not haunting the town of Waco after an upset loss to Texas.

1. Florida. A crushing, demoralizing, destabilizing, inexplicable, stupid, big dumb Will Muschamp football loss to Georgia Southern. The Georgia Southern Eagles. Next season Muschamp will stroll the sideline shadowed by Death himself, or at least by Spencer Hall dressed as death. Fires will be lit in the endzones of Ben Hill Griffin Stadium in a vain attempt to distract from the product on the field. (It's not like Florida will find themselves there anyway.) Florida Gator football may itself die, in hopes of being reborn as something less big, less dumb, and less Will Muschamp-y. Be strong, Gators. Numb yourselves for a brutal crushing at the hands of FSU, and then you can sleep. (Note: this was written after said crushing already had come to pass. For the sake of the writer just pretend Week 13's rankings were delivered on time.)

5. Nebraska. Sure, Husker fans are seething after losing their regular season finale to Iowa at home. Bo Pelini don't care, though. You can't fire him, Husker fans. After an upset win in the Gator Bowl, Pelini will walk out of Everbank Field, shirtless, with both middle fingers extended, and you'll never see him again. He's going out on his own terms, damn it.

3. Fresno State. Oh, Fresno. You didn't just duff it by losing to a middling San Jose State. That would have been enough, but you also duff'd your way out of a BCS bowl. That's a $16 million dollar duffing for the Bulldogs and the entire Mountain West Conference, to go back into the pockets of the big guys. Rich Uncle BCS Pennybags fully approves of this loss! Have fun losing even more money in Las Vegas, Fresno.

2. Clemson. If Duff'd It! were a musical, Clemson would play the lead. Clemson added another glorious chapter in the long history of Clemsoning not just by being upset by South Carolina, no, but by turning the ball over six times, including on all three of their fourth quarter possessions, blowing their BCS bowl chances in the process. The next time a Clemson fan tries to tell you Clemsoning is over, remind them of this game. Clemsoning is not over. Clemsoning will never be over. Clemsoning will always be at thing, and Clemson will always own it. Such is your fate, Tigers.

1. Alabama. RIP, Alabama football dynasty. Chris Davis caught a last second missed field goal, ran the ball back for a touchdown, and then drove it right into the Crimson Tide's heart. At the funeral, Nick Saban gave a ten minute eulogy that consisted entirely of Nick Saban scowling at the crowd and concluded without him saying a single word. Afterward, the Tide's ashes were scattered across the field of Jordan Hare Stadium. It's not what they would have wanted, but Auburn paid a lot of money to make sure it did anyway.

Way to totally devalue Georgia Southern's win over you, Gators. Obviously the Eagles won because you spent too much time blocking yourselves.

Wait come on that's the exact same play are you even trying..... what? It's not the same play? Well, it doesn't matter, it's disqualified. You can't just tackle yourselves every week and expect to keep winning ACC Conference Play of the Week. Nothing interesting about a one-trick pony.

Alright we've got this trick play going; I'm gonna pass it to you and then you're going to pass it to -

Wait what are you doing -

This is why I never throw the ball to you. 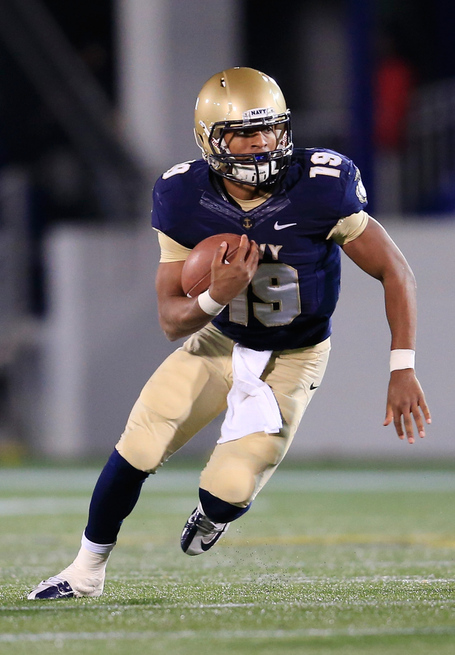 Let Keenan Reynolds run where ever he wants. Let him run for 240 yards and seven touchdowns, setting an NCAA record. If Osama bin Laden were still alive he'd score twelve touchdowns on his Al Qaeda football team and spike the ball in bin Laden's face in lieu of scoring a thirteenth. Spreading freedom through football dominance, y'all. That's how it should be.

So congratulations, Keenan Reynolds! Your reward is a chorus of screaming eagles, praising your name wherever you go. That.... actually doesn't sound like a very good reward. Luckily, there is a website where you could sign up for a new reward provided by the government, but I hear it kind of sucks. Good luck! 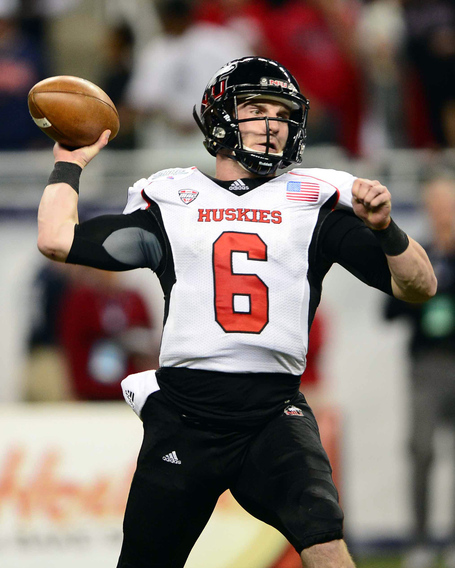 Jordan Lynch might be a quarterback, or he might be a running back. Or he might be a wizard. (I'm firmly in the "wizard" camp, for what it's worth.) Against Western Michigan Lynch decided passing was for Muggles and called his own number 27 times, rushing for 321 yards (an average of 11.9 a carry) and three touchdowns. Some would call that skill, but I'm convinced it's black magic.

So congratulations, Jordan Lynch! Your EotMotW award (provided you can make it past Bowling Green this weekend) is.... an Orange Bowl! Awesome! It's pretty great that as a MAC team you'll get to play in your second straight BCS bowl, against....... Alabama. Oh. Well, we're not responsible for any maimings or deaths incurred as a result of playing in a BCS bowl. (Doesn't seem so great now, does it?)