Looking at the matchup when Ole Miss has the ball

S&P+ is a statistical measure of a team's performance on a per play basis. The "S" stands for success rate, "P" for point value, and "+" is opponent adjusted. It is essentially OPS+ for football. It takes the slugging percentage, your explosiveness, and adds it to your on base percentage, your success rate, and adjusts for opponent. 100 is average and everything greater than 100 is good, (120 is about top 20 or so) so for each category the higher the bar the better. You can read more here.

These are the normal per-play measures of success I have used all year, but just in case here is a quick refresher; Passing Downs are 2nd-and-7+ and 3rd/4th-and-5+, Standard downs are all other downs. Overall S&P+ is the total S&P+ for the unit, offense or defense. A new category is Drive Efficiency, which measures your success on the drive, not each individual play that makes up the drive. 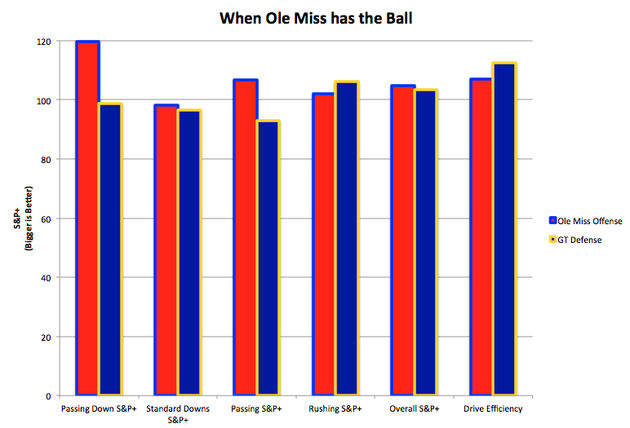 These numbers are national rank according to FEI's Special Teams Rankings. They are measured by comparing each team's performance to national averages for kicks in the same situation. For example missing a 50 yard field goal is punished less than missing a 25 yard field goal.

Well that was Part 1 of 4 in our Opponent Stat Preview, tomorrow we will look at the matchup between Ole Miss's Offense and Georgia Tech's defense with some drive based statistics.