Duff'd It! Rankings and other Accolades, Week 15

LOOK AT ALL THESE CHAMPIONSHIPS YOU DON'T HAVE

Share All sharing options for: Duff'd It! Rankings and other Accolades, Week 15

3. Northern Illinois. Rich Uncle BCS Pennybags strikes again! NIU was hoping to break into the mainstream by making their second straight BCS bowl game, so Bowling Green reminded them MACtion is 100% pure hipster football. The Huskies lost to the Falcons to the tune of 47-27, mostly thanks to Matt Johnson's 393 yards and five touchdown passes, a feat he accomplished while wearing a scarf knotted like a bandanna. The win knocked NIU out of a BCS game and put Bowling Green in a bowl game in Detroit, resulting in this game being a rare double-Duff'd!

2. Oklahoma State. With a Big 12 championship and Fiesta Bowl bid on the line, the Cowboys did what they always do at the end of the season: lose to Oklahoma. (No, really, they always lose to OU. The series is 84–17–7 in favor of the Sooners. Death, taxes, Oklahoma State losing Bedlam: the three life constants.) "Bury me.... with my gun...." Pistol Pete said with his dying breaths. Unfortunately, the Cowboys were practicing a trick play with Pistol Pete's gun, and tossed it backward into their endzone, where the Sooners recovered it for a touchdown. They're not giving it back, either.

1. Ohio State. Oh, Buckeyes. You were so close to winning the B1G and punching a ticket to the BCS championship, but then Braxton Miller threw for 101 yards and Michigan State scored two touchdowns in the fourth quarter, and now there's a sad Urban Meyer quietly eating pizza in the tunnels of Lucas Oil Stadium. You don't need to do that to yourself, Urban. There's a spot right here for you on my couch; we can order an extra large chicken alfredo and a mega chocolate chip cookie to eat while watching the BCS championship game together. Come on, it'll be fun! *pats couch*

"What the hell is that, some kind of varmint? It's just a football? Bah, if i can't shoot it and mount it I don't want it."

You see, Mizzou defense? That's how you stop Tre Mason. Y'all all got showed up by unknown SEC umpire. 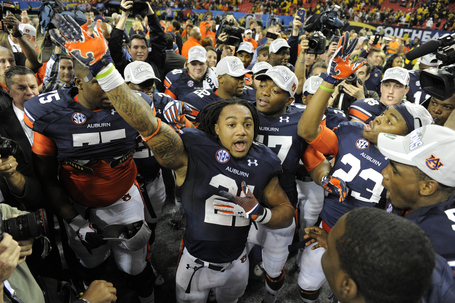 Tre Mason is running everywhere. He ran for 304 yards and four touchdowns against Missouri in the SEC championship game. Now he's running all the way to Pasadena for the BCS championship game. I'm not really sure why he's doing that; the game is a three and a half weeks and two thousand miles away, and only the yards he gains on the field during game time count toward his stats. You can't stop him either, because you're not anywhere near as good as Mizzou's defense and they sure as hell weren't.

So congratulations, Tre Mason! Your reward was this round trip ticket from Birmingham airport to LAX, but you're already a quarter of the way there. So uh.... anyone want to fly to Los Angeles the weekend of the BCS championship? It doesn't include a ticket to the game, you'll just get to be in LA for a few days. Anyone?