Based on last week's results, you really ought to start listening to me.

Yes, you just saw a five-touchdown line on a conference game featuring two top-20 scoring defenses. That's just how silly Florida State is this year. This one's tempting with them being on the road, but I don't see the 'Noles slowing down.

North Carolina started the season with a loss, followed by a win, followed by 4 losses, and now have won 2 in a row. They should win this game, the question becomes by how much. They're at home against Virginia, who hasn't done well on the road so far this year. I bet the Tar Heels are starting to build momentum towards a strong finish.

Maryland's trek through the ACC so far this season has looked as if they were in the mob, and said they were leaving right in the middle of everyone. It's been one big beatdown, with the only exception being a last-second win on a missed UVA field goal. Syracuse is heading for bowl-eligibility desperation, with only 4 wins and matchups left with Florida State, Pittsburgh, and Boston College. This one's close, but I'll take the home team.

New Mexico State is a really bad football team, and Boston College is better than we thought. (Fine, better than I thought.) This should be a romp, even on the road.

The Wolfpack currently sports an 0-5 record in-conference and is going on the road. I can't really trust them in this one. 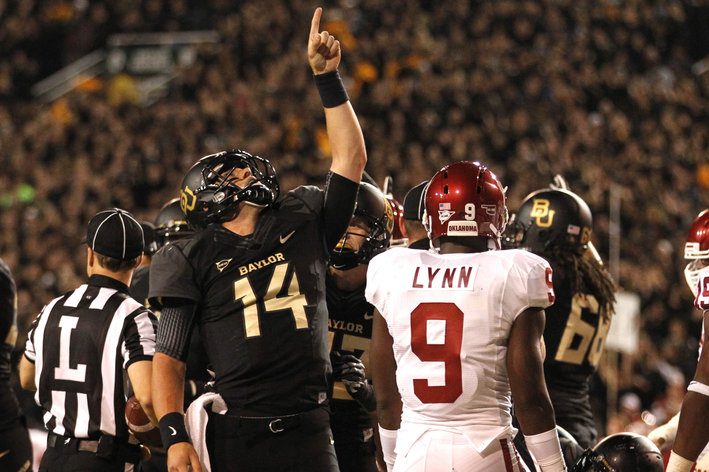 So here's the deal. Baylor is currently top-10 in the country in Passing Offense, Rushing Offense, Scoring Offense, and Scoring Defense. I'd also be willing to bet they're Bottom 10 in the country in strength of schedule. To date, they've played 3 teams with a winning record, none of which was a BCS conference opponent, and one of which was FCS Wofford. Now, I'm not saying their 7-0 record is straight-up worthless, but I do think that Oklahoma is going to be unquestionably the best team they've played so far, and that 16 is just too big of a line here. Sooners cover 16, Bears win straight up.

This is an interesting one, largely in that it basically sets the tone for the Coastal Division down the stretch. Virginia Tech started 6-1 but has now lost 2 in a row (to teams they should have beaten, honestly), while Miami lost their first of the season last week, and a whole lot more in the process. (RB Duke Johnson was lost for the season with a broken ankle.) I'd like to think that the Miami offense has the firepower to make up for his loss, but the Virginia Tech defense is also one of the best around, except that they just gave up 34 to Boston College, and ugh this one is really tough.

I'm going to say that Virginia Tech doesn't have the offensive ability to keep up with Miami, and that Miami's passing offense will succeed, even against the Hokies.

It surprises me massively how different this Notre Dame team is from last year's. The offense has had struggled in ways expected after losing a sensational QB, but the defense has had a really tough time too. Even still though, they sit at 7-2 and score about 30 points per game. Pitt, meanwhile, was described last week by Cardiac Hill's Anson Whaley as "very average". I think that makes Notre Dame slightly less average, enough to cover this line.

Speaking of teams that aren't what they were last year, we have LSU and Alabama. Both teams have this weird thing where their offense has gotten considerably better, and their defense isn't as good as before -- extremely uncharacteristic for both teams. That said, I think this game will surprise quite a few folks. Alabama is a big favorite (close to two touchdowns), but that defense hasn't played against a good offensive team outside of Texas A&M, which put up 42 points. I don't think LSU puts up that many, but this will be the most points the Crimson Tide defense has allowed since week 2. I'd also venture that this is Alabama's best shot at losing all year, including the trip to Auburn on Thanksgiving Weekend. However...