Duff'd It! Rankings and other Accolades, Week 10

LOOK ON THE BRIGHT SIDE, WILL MUSCHAMP. FLORIDA STATE WON'T EVEN OFFER YOU THE ILLUSION OF STAGING A COMEBACK.

Share All sharing options for: Duff'd It! Rankings and other Accolades, Week 10

I am told this was another great weekend of college football. I watched not a minute of it outside of Tech-Pitt, because I was busy all day with homecoming stuff. Fortunately, the Duff'd It! Rankings see all, mostly because we employ a steady stream of..... volunteers, who willingly watch every minute of football and are certainly not strapped to chairs and forced to watch several games at once Robot Chicken style no way nope -

5. Miami. The U is back! Back to being out of the national title conversation, that is. The Hurricanes found themselves the latest victim of squinting wizard Jameis Winston, but don't worry, Canes! You'll have a chance to lose not as badly to FSU again in just four weeks! Assuming you don't lose to Duke, of course. Because seriously, there is a really good chance you could lose to Duke.

4. Northwestern. Hail Mary, full of grace, hallowed be thy name. I'm pretty sure I already got that wrong. I was never a good Catholic. The Wildcats lost their fifth straight game at the death after knocking Ron Kellogg's Hail Mary pass upward instead of downward. At this point, Northwestern is likely headed toward an 0-8 finish in B1G play, but hey, Wildcats! You'll at least be able to point to your 4-0 out of conference record and talk about how tough a league the B1G is! No one will believe you, of course.

3. Virginia Tech. Good to see you back, Hokies! You followed up an embarrassing loss to Duke with an incredibly lopsided blowout another one to Boston College! The good news is that your next game probably won't result in yet another. The bad news is that's because your next game is versus Miami. Have fun!

2. Michigan. Now you understand what it's like to go up against the Michigan State defense and have it slowly but surely choke the life out of you, Wolverines. Devin Gardner will be seeing Spartan defensemen in his nightmares for weeks after getting sacked seven times for -46 yards. Or maybe he'll be seeing his own offensive linemen, failing to protect him over and over again. You had one job, guys. One job!

1. Florida. Congratulations, Gators! You came out on the wrong end of the World's Largest Outdoor Cocktail Party once again after spotting Georgia twenty points and challenging your offense to dig themselves out of that hole. Shockingly, they failed! Because you forgot your offense is actually really terrible. It's a good way to lower expectations heading into that big game against Vanderbilt, who probably watched the game while sipping Mint Juleps and laughing because they're probably going to beat both Georgia and Florida in the same year.

Gotta give credit to 71 for Marshall here, that's a killer block, even if it is on his own teammate. Even more props to the football itself for putting on its best Golden Snitch impersonation, slipping away from Marshal, then Southern Miss, then Marshall, then Marshall again, before finally being corralled.

People in Marshall seem to fall down a lot. Must be something in the air in Huntington. 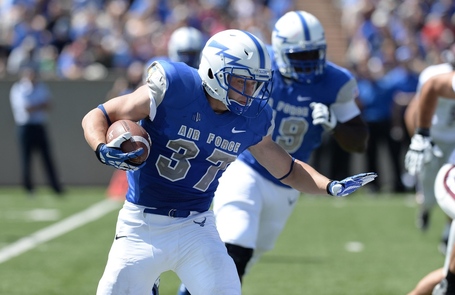 LaCoste was the ground force for Air Force this Saturday. With 23 carries for 263 yards and three touchdowns, he was the key to the Falcons' 42-28 victory over Army, proving their sweet awesome planes are superior to Army's dumb sucky tanks for the 22nd time in the last 25 years.

So congratulations, Anthony! As a reward, you... uh.... get to fly in a really cool plane! Yeah! Your friends are gonna be sooooooo jealous.