Duff'd It! Rankings and other Accolades, Week 12

WE'RE RIDING THE DUKE EXPRESS ALL THE WAY TO CHARLOTTE

Share All sharing options for: Duff'd It! Rankings and other Accolades, Week 12

5. Northwestern. The Wildcats have worked their way into perma-duff'd status after losing six straight games, which is coincidentally also the number of Big Ten games they've played. Number six was the most duff-tastic, as the Wildcats let Michigan kick a field goal as time expired in regulation to send the game to overtime..... tied at 9-9. Michigan-Northwestern was so wretched that all surviving footage of the game was buried in New Mexico, right next to all the E.T. video game cartridges. Let's never talk about Michigan-Northwestern ever again.

4. Virginia Tech. It happens, Virginia Tech. You hit up the clubs in Miami, leave with multiple women on your arms, and then you wake up the next morning naked in the bathtub with the shower running, you have the world's worst hangover, and also the women you left with took your clothes and all your money. Beating a top 15 Miami team in Coral Gables and then following it up with an overtime loss to Maryland at home? Basically the football equivalent of that.

3. Miami. On the flip side of that coin, Miami's last two weekends have been the equivalent of going to the club, getting wasted, throwing up at the bar, getting kicked out, and watching a nerdish type leave the club with the aforementioned women. That nerdish type is Duke, who beat the Hurricanes 48-30... and now leads the ACC Coastal. The Duff'd It! Rankings warned you this would happen two weeks prior, Canes, but did you listen? No, probably because you don't read this column at all, but maybe now you'll pay attention. Please remember to comment, share, and subscribe!

2. West Virginia. There's really no way you can lose to Kansas and not top the Duff'd It! rankings. Especially not when you lose to Kansas as badly as the Mountaineers did - the 31-19 final score is highly misleading, as WVU had to score twice in the final five minutes of the game to make it even that close. It's safe to say at this point that no one has benefited more from West Virginia's move to the Big 12 than the couches of Morgantown, but Holgo don't care, he just stole someone's motorcycle and is making his own way back home, both middle fingers to the world.

1. Georgia. Mark Richt lost control of Mark Richt. Georgia faced a 20 point deficit with ten minutes remaining, but then Auburn forgot how to play defense and let Georgia retake the lead with under two minutes remaining on a play that may or may not have been a touchdown. And allllllll of that went right out the window with the craziest play these Duff'd It! rankings have ever seen. My approximate reaction to that play:

"Okay, it's 4th and the game, they need to pass deep here. Annnnnnd..... nope, Georgia pulls out another miraculous victory and HOLY SHIT HE CAUGHT THAT A;DLKJFA;LDKJFA;DFSDFDFKJD"

Sorry, Bulldogs. You found out Saturday that if there's a god, they hate Georgia. But they probably hate Florida and Georgia Tech more, so there's that.

You know that thing where you walk into a room and forget what you were doing? Arizona's Drew Riggleman did that walking onto the field, except worse - he forgot he was punting while he was punting. Please someone always keep an eye on Riggleman, who hopefully does not suffer such a lapse while driving, taking a test, or punt return blocking.

Auburn got bored with their 20 point lead over Georgia in the fourth quarter, letting the Bulldogs get back into the game and tackling their own teammates with ESSSS EEEEE SEEEE SPEED. Disqualified because Duke did it better two years ago. 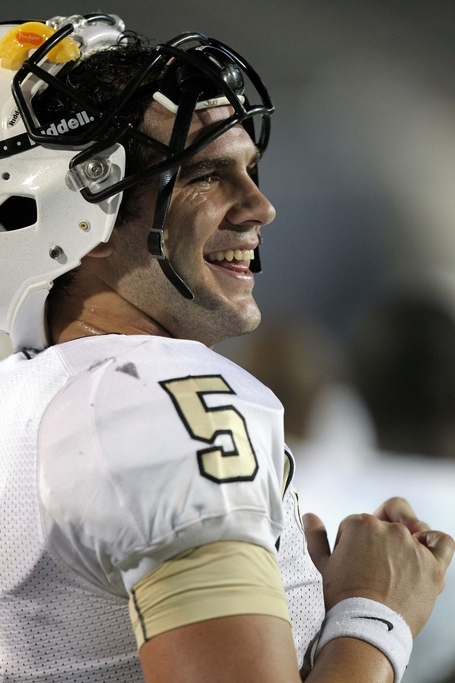 Robert Godhigh would have been a leading candidate for this week's EotMotW award, with a ridiculous amount of yardage on minimal touches (12 carries for 126 yards, 5 catches for 103 yards, and two touchdowns), but there was the tiny aspect of Georgia Tech getting completely demolished by Clemson on Thursday.

Enter Bortles, who threw for 404 yards and four touchdowns, including two huge completions in the last 90 seconds of the game to tie and then defeat the mighty.... Temple Owls. Well, it was an incredible performance nonetheless.

So congratulations, Blake Bortles! Your reward is a likely BCS bowl berth, which is great to see for a non-AQ team and.... wait, what? The Knights play in an AQ conference? Get out of here. I don't believe you.