Duff'd It! Rankings and other Accolades, Week 11

LSU became the latest victim to be incinerated by an impact form an Alabama meteorite this weekend. An actual meteorite may have been preferable for the teams topping this week's Duff'd It! rankings.

Share All sharing options for: Duff'd It! Rankings and other Accolades, Week 11

5. Idaho. A 1-8 team losing to a 6-3 team seems pretty mundane, but Old Dominion built that record on the backs of six FCS teams and had precisely zero wins against FBS competition until now. It's safe to say Idaho will be more than happy to end this wandering state of existence as an independent after this year. They're not going to do any better in the Sun Belt next year, but at least then they'll be able to cry into their piles of conference revenue money.

4. Oklahoma. Way to go scoring a safety on Baylor's offense, Sooners! Unfortunately that was pretty much your only accomplishment on the night as the burning Bearsmobile, now tarpless and fully unleashed, put up 41 points and 459 yards on the way to burning an angry bear trail all the way to the Fiesta Bowl. Or maybe even the national championship. Stephen Colbert thinks bears are terrifying, but bears driving burning cars and holding crystal footballs are a sign of the end times.

3. Miami. When you lose consecutive games to mediocre teams in embarrassing fashion, an away matchup against a top 15 team is the cure for what ails you! That doesn't make any sense, but on #goacc it does. The Canes allowed Virginia Tech's weakness to become their strength, letting Logan Thomas - who had a 56% completion rate on the season - go 25 for 31, and letting the Hokies score 42 points, equaling their total output for the rest of the season.* Miami's loss, of course, has allowed for the most #goacc tradition of all - a four way clusterf--- race for a division championship in the ACC coastal. Good luck this weekend against Duke, Canes! You actually do need to win this game, and there's a semi-decent chance you won't.

* Obviously not true, but you believed it for half a second, didn't you?

2. Oregon. Ducks die all the time when they accidentally fly straight into trees. It's true!* Stanford slowly sucked the life out of Oregon last Thursday, averaging 4.2 yards a rush on their sixty-six rush plays - many behind some crazy and seemingly unfair offensive formations. This allowed them to eat up massive amounts of clock (the Cardinal had three drives lasting longer than seven minutes) and leave none left for Oregon. Normally that wouldn't be a problem for the Ducks' explosive, burn-it-to-the-ground offense, but Stanford's defense arrived to crush their spirits and DeAnthony Thomas' running game, ruining Oregon's championship hopes for a second consecutive season.

* I'm pretty sure this is not actually true.

1. Florida. Were mashed into a fine powder by Vanderbuilt, a result these Duff'd It! rankings totally called last week. The Gators offense died many weeks ago, and what we are seeing now is simply a corpse appearing to move a football. Even their touchdowns are accidents. The Gators will likely not make a bowl game, and so their season will be cut short, much like their game mercifully was for Gator fans in Florida who were still sober and watching by that point.

Crap, that defender jumped the route! Oh man, and he's coming my way. I've got one shot to stop him.... but man, I'm so tired. I spent way too much time and money at Ruby Tequila's last night. But I've almost.... ahhh, forget it. You guys got this. Right? Guys?

This was not a safety. It was exactly four yards away from being a safety. I don't know what drugs the MAC crew for this game, but it apparently makes you imagine points, and Florida's offense would like to have some. They've forgotten what real points feel like. 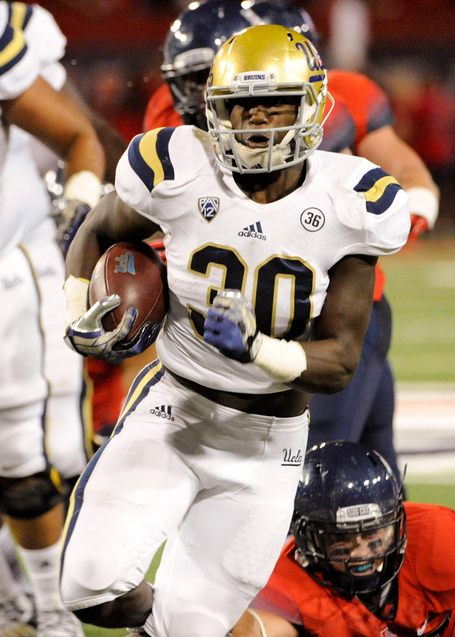 EotMotW this week almost went to Duke's DeVon Edwards. On a day when Duke's offense didn't seem much interested in scoring, Edwards literally took things into his hands, scoring on a 100 yard punt return and following it up with two fourth quarter pick sixes on consecutive plays, resulting in a final of DeVon Edwards 21, NC State 20. (Okay, technically Edwards didn't score those PATs and it'd really be Edwards 18, NC State 20. But he allowed those PATs to happen, so that totally counts.)

But then there was Myles Jack. "120 rushing yards and a touchdown is pretty good, but surely not worthy of the EotMotW award," you're thinking, and normally you'd be right! But Myles Jack isn't even supposed to be on the offense. He's a linebacker, who in addition to the aforementioned stats had eight tackles and a fumble recovery in the endzone on the other side of the ball.

So congratulations, Myles Jack! In addition to being named Employee of the Month of the Week, Spencer Hall has bestowed upon you the inaugural Private James Ramirez Award for Doing Everything. Now get to the practice field - you're going to need to learn the quarterback and punter positions for next week.