Last weekend was terrible. It's clear that the season is starting to get weird. Fasten your seatbelts.

Virginia Tech had a major stumble at home against Duke last week, and has to go on the road this week to take on a tough Boston College team. That said, Boston College left me hanging out to dry this week after I said that they'd hang with (and beat) UNC on the road. Not sure that offense can penetrate the Hokie defense.

Wake Forest is the most frustrating team for me to pick right now. They're so bad at offense, yet they put a scare into Miami last week, and I feel like they should be 2-6 but they're 4-4, and it's all just so confusing. Syracuse had a bye week last week, and this week is looking to rebound from that tattooing they got on the Flats a couple of weeks ago. This could be an ugly game. I'll take the Orange at home.

Clemson scored 19 points through 3 quarters last week at Maryland, and won 40-27. I'm not really sure how I feel about them after the Florida State loss, still. That said, Virginia has lost 5 in a row and is in the bottom quarter of the country in scoring offense. Not sure they'll hang with Clemson in this one. 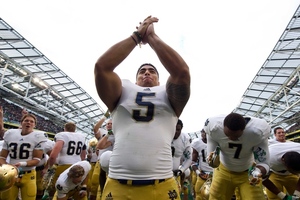 You saw that right, folks -- two top 10 teams playing each other, and it's a 3 touchdown spread. What you also saw right is that you didn't really jump at that line. Florida State has looked phenomenal all season, and Miami's really struggled ever since beating Georgia Tech. Now they go on the road to take on a team whose closest game so far was a 48-34 victory (against Boston College, of all teams). This could be really bad loss for Miami on the scoreboard.

This is going to be a very unconventional georgia-Florida game, given that neither team is ranked or even really in contention for a major prize. uga has been really beat up with injuries this season, and Florida's offense looks like a 7-year old trying to play Xbox for the first time. I think the Gators pull off 14-17 points regardless, and it'll be up to uga to top that.

This game confuses me a little bit. Michigan's offense has been pretty good, and they're 8th nationally in scoring offense. They're 6-1, with their only loss to Penn State in 4 overtimes. The Spartans' defense is nasty, but they're middle of the road in scoring offense. They're 7-1, and have only lost at Notre Dame. How are these teams ranked so low? As it turns out, they've both only played one decent team (Notre Dame in each case -- Michigan beat them), so strength of schedule is doing neither a favor. This one is a toss-up, but I'll take the home team and that defense to stop Michigan and the fighting Devin Gardners.