Duff'd It! Rankings and other Accolades, Week 9

Share All sharing options for: Duff'd It! Rankings and other Accolades, Week 9

Tulane, Rice, and Duke are bowl eligible. That fact alone made for a spooky weekend in college football, but for some teams it was a Netherworld-esque house of horrors. This post is Halloween themed. I'm sorry.

5. South Florida. Willie Taggart's biggest fear? Scoring offensive touchdowns. He suffers from a crippling case of offensophobia. Saturday made it three straight weeks the Bulls haven't had a single touchdown on offense. It worked out alright for them the first two times, but shockingly did not against Louisville. USF needs to start a rivalry with Florida so we can finally watch a football game end 5-3 in quadruple overtime. Yes, that would mean a safety in overtime. USF and UF would make it work.

4. Penn State. Lost to Ohio State 63-14. If you remember the last time the Nittany Lions were beaten that badly, I have but one question for you: Where is the fountain of youth located?? Because that was 114 years ago, when the NCAA didn't exist to prevent things like college teams playing professional teams, which is what the Duquesne Country and Athletic Club apparently used to be.

3. Nebraska. Lost to Minnesota for the first time in over half a century, thanks in no small part to Minnesota's mascot having an Iron Man costume at his disposal. But don't worry, Huskers: all you need is to uncover yet another long buried candid rant from Bo Pelini, this time telling everyone associated with the university just where and how to screw themselves.

2. Virginia Tech. Good lord, Hokies, you lost to Duke! Sure, it's the best Duke team in two decades, but you still lost to Duke even after outgaining the Blue Devils by nearly two hundred yards! Do you realize what you've done?? Now they're the odds-on favorites to win the ACC Coastal!*

*Not really, but man, can you imagine? You would totally travel to Charlotte to root for Duke against FSU in the ACC Championship. Yes you would.

(I'm so sorry, Tigers. Another sad chapter in the Tale of the Damned North Endzone. The good news is you're still square in the driver's seat for the SEC East championship and a beatdown in Atlanta at the hands of Alabama. Maybe that's not such great news after all.)

No, Patton Robinette, that's not an armpunt, that's just a regular punt. An armpunt would have been far more preferable, actually. You're a quarterback, you're not even supposed to be punting at all.

Jesus Patton are you even trying 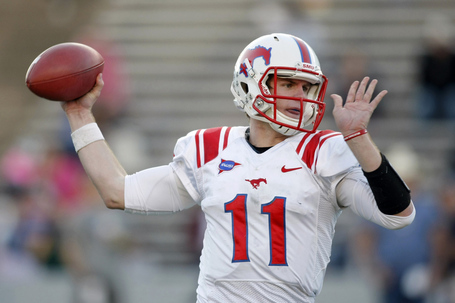 This man is lighting up all the mups in University Park! With 635 total yards six touchdowns - four in the air, two on the ground - the former Longhorn's performance against Temple was more than superhuman, it was..... supernatural.

So congratulations, Mr. Gilbert! As a reward, we've got something special for you.... it's your old Texas uniform! Go ahead and put it on! 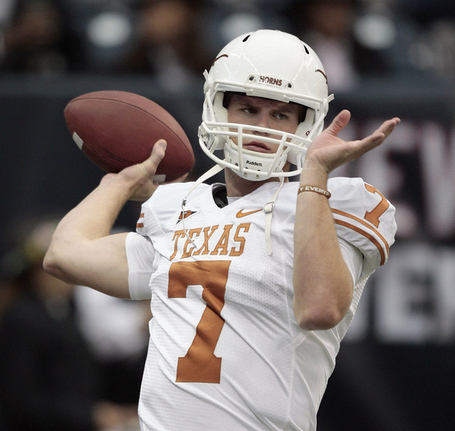 Hey, look at that! It still fits! You can't keep it, though. NCAA violation and stuff. It does make for a good Halloween costume, though! But you probably shouldn't wear it around in Austin.