Duff'd It! Rankings and other Accolades, Week 6

AN ENTIRE WEEKEND OF CRAP IN ATLANTA, JUST CRAP AND MORE CRAP

Share All sharing options for: Duff'd It! Rankings and other Accolades, Week 6

5. Ole Miss. Y'all, I'm starting to think Dr. Bo Wallace isn't a real doctor, or at least not one licensed to perform surgery on people. (Maybe on Longhorns, though. I'd still believe that.) After scoring 22 points in two consecutive trips into the heart of Alabama I'm sure the Rebels will be more than happy to stay and home and oh wait they're playing Texas A&M next. You should probably go ahead and prepare yourself for the impending tribunal before the Board of Medicine, Dr. Wallace.

4. Penn State. Penn State, previously 16-0 against Indiana, is now 16-1 after suffering a 20 point loss in Bloomington this weekend. (Allowing the Hoosiers to score 23 points in the final quarter probably helped.) This never would have happened if Joe Paterno had still been around!

3. Southern Miss. Congratulations, Southern Miss! After losing to FIU you are empirically the worst team in college football! So far. It's not inconceivable that the Golden Eagles could go winless on the year, which would be the second season in a row for them, rocketing them straight up to Ultra-Duff'd! status.

2. Cincinnati. The AAC false flag operation to nuke Louisville's strength of schedule continues after the Bearcats' loss to previously winless USF on Saturday. Calling this a win for the Bulls almost feels like a misnomer, though, as their offense scored precisely zero of their touchdowns. Can we say Cincy outderped USF? That sounds more fitting.

1. Maryland. Spent sixty minutes doing this against Florida State, as the Terrapins were mauled by the Seminoles to the tune of 63-0. Did you know Maryland was ranked in this game? I know, it sounds silly to me too. And also to Maryland fans:

The ACC is going to miss you for moments like these, Terps. I don't know about much else, though.

Honorable mention: Atlanta. Barves. Falcons. Tech. Thrashers. Everything is terrible and I hate everyone.

ACC Conference Play(s) of the Week

ATTACK OF THE BRICK WALLS double feature! Rutgers' Leonte Carroo can at least be satisfied he caught a touchdown in 2OT before taking one to the face. Tennessee's Jonathon Johnson was not so lucky, as his facewall only served to compound the torment of letting a touchdown pass slip through his hands.

Maybe put some padding on those endzone walls, guys. 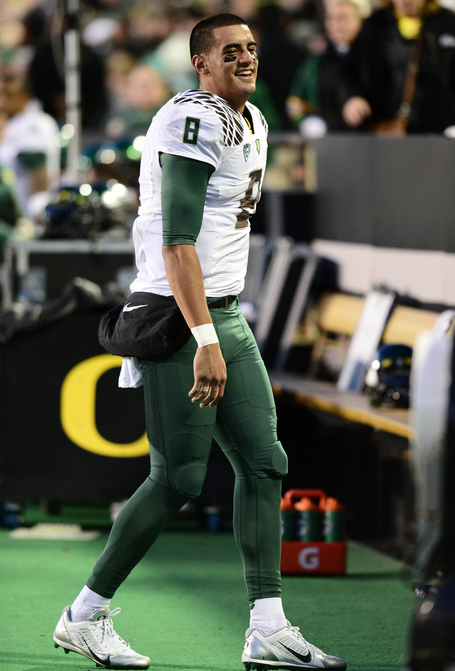 Well hello again, Mr. Mariota. You've been hard at work these past few weeks, and it's paid off with your second EotMotW award! Seven(!) touchdowns - five in the air, two on the ground - and accruing 398 of Oregon's staggering 755 total yards helped ensure Colorado's campus was blazing for a different reason than usual this Saturday. Please try to take it easy from here on out, Marcus, as due to the government shutdown the resources needed to put out the fires you keep setting are becoming scarce.