Last week was a little iffy, let's make this one better.

I really hate that this game is where it is on the schedule given what we've seen so far. Reason being, I really don't know what to expect. Obviously it plays into my expectations that I've never seen us defeat Miami during my tenure in college, but then again we were so close last year. Then again, the Yellow Jackets looked pretty downright awful last week, but then again Miami's defense is nowhere near as good as the Hokies'. I'm really conflicted. I don't have good feelings about this one in any case.

I'm calling it now -- this is going to be a weird one. There's no great way of knowing what will happen given Ball State's 4-1 record against Illinois State, Army, North Texas, Eastern Michigan, and Toledo. However, they're 10th nationally in passing offense and 27th nationally in points per game. Meanwhile, Virginia has gone 2-2 against BYU, Oregon, VMI, and Pitt, and has scored a grand total of 29 points in 3 games against FBS teams. I really don't know how to judge Virginia, but this seems like it could get a bit ugly for the Cavs. I'm going to be bold here.

There's not much that can be said about Maryland this year outside of the fact that they've been taking care of business. They've allowed a total of 41 points in 4 games and are averaging a 30-point margin of victory in those games. However, consider that alongside their #25 ranking, and then consider that they're a 15-point underdog this weekend, and you'll quickly learn something about the level of teams they've played thus far. They'll open their ACC schedule this weekend with what could be a nasty wake-up call against Florida State in Tallahassee. I expect the Seminoles to win by at least 17 here in their send-off to the ACC defectors. 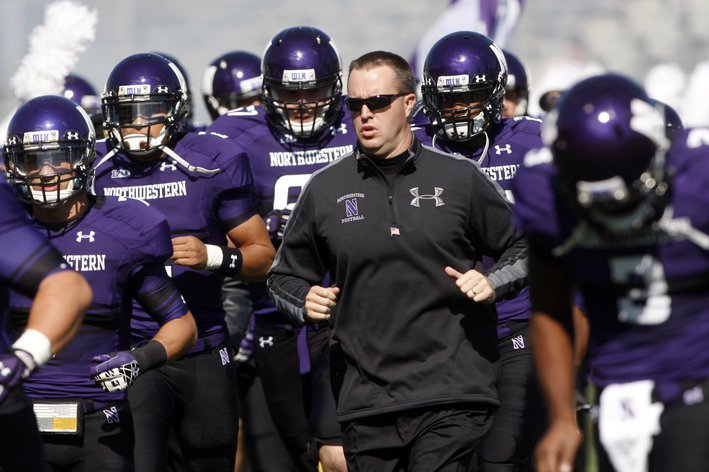 In possibly the biggest game in Northwestern football history, they'll host the #4 Buckeyes following a bye week that capped off a 4-0 start. Meanwhile, OSU travels to the north side of Chicago one week after a physical game against Wisconsin. Two weeks under the bright lights will be a lot for the Buckeyes, but nothing they can't handle. I think OSU wins but it's close, with Northwestern covering 6.5.

What happens when an unstoppable force meets an immovable object? I'm not sure, but we're not going to find out this weekend in Blacksburg. At first glance, one would think that Virginia Tech's defense will be tested by UNC's powerful offense here. However, upon second glance, UNC's offense actually isn't that good. They're in the bottom half of the country in total offense and scoring offense, with the only redeeming factor being their 23rd-ranked passing offense. Add in their 93rd-ranked scoring defense, and this is setting up to be a disastrous season for Larry Fedora and the Tar Heels. Hokies win by 10 here, even with a struggling offense.

Boston College has had a rough couple of games against USC and Florida State, but performed extremely admirably on the road in Tallahassee last week. I think they're better than they look, and I think they're going to make Army wish that they just hadn't made the trip this weekend...which, interestingly enough, was almost the case. HAH, JOKES.

You know, sometimes it sucks doing these picks every week, because it reminds me how disgustingly top-heavy the Atlantic division is. When you get past Clemson and Florida State, there really is a major drop-off to the likes of Maryland and NC State. The Wolfpack have only played one legitimate game, and they lost to Clemson in a controversial game on a Thursday night. They came back last week and took Central Michigan to the woodshed though, and pass the eye test by a mile in every direction as compared to Wake Forest.

To the untrained eye, this one's a can't-miss kind of pick. It's Syracuse taking on Clemson, what could happen? Ah, not so fast, grasshoppers. Having a second background in the Big East, let me tell you something: I don't care who you are, I don't care how good you are, and I don't care how bad Syracuse is -- weird things happen in the Carrier Dome. Take nothing for granted up there. Also know that this is Syracuse's first-ever ACC conference game, so you know that they'll be hyped up and the environment a little crazy. I'm getting some weird vibes from this game, and I'm going to go out on a limb with my pick. (Probably a stupid, structurally unsound limb, but a limb nonetheless.)

Orange covers 13.5, but Clemson comes away with the win.

I gotta hand it to Stanford here. After a somewhat slow start against San Jose St and Army, the Cardinal have kicked things into gear against Arizona State and Washington State, and really look to be in mid-season form. This week they host Washington, ranked 15th after a 4-0 start against Boise State, Illinois, Idaho State, and Arizona. The Huskies do a lot well, particularly running the ball and playing defense. Meanwhile, Stanford is pretty good at the same things, meaning you can safely expect this one to be a slugfest of some form or another. On a neutral field this might end differently, but Stanford is not to be picked against when playing on The Farm.