Taking an in-depth statistical look at this week's matchup.

When Pitt has the Ball

S&P+ is a statistical measure of a team's performance on a per play basis. The "S" stands for success rate, "P" for point value, and + is opponent adjusted. It is essentially OPS+ for football. It takes the slugging percentage, your explosiveness, and adds it to your on base percentage, your success rate, and adjusts for opponent. 100 is average and everything greater than 100 is good, so for each category the higher the bar the better. You can read more here. 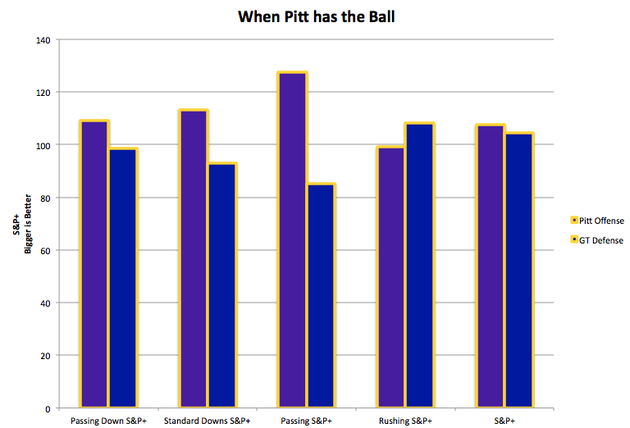 Edit: Pitt is on the left (more purple) and GT is on the right (more blue).....teams need to get some original color schemes 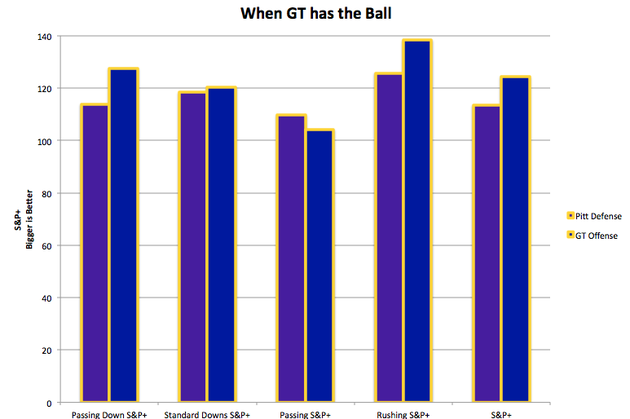 GT improved from 31st last week to 20th this week in Special Teams Efficiency, the total amount of points gained through all facets of special teams as determined by FEI. Pitt ranks 109th in STE, so look for Tech to have some big plays and hidden yard advantages through special teams.

This table shows the line for different picking services, and a win percentage associated with the pick, or derived from the line. (F/+ picks haven't been released so I will add them when they go out).

* The FBS drive stats is for a neutral field, and the line is derived from the win%. Home field advantage is generally to assumed to be anywhere between 2-3 points for the home team.