Georgia Tech Football: Getting to Know the Miami Hurricanes

To introduce you to Miami, we're taking a look at the stats behind our upcoming opponent, and how they compare to ours.

Share All sharing options for: Georgia Tech Football: Getting to Know the Miami Hurricanes

I'll start this post by saying that I have not watched more than a half of Miami Football this year. I didn't watch the Florida game, and definitely didn't take the time to watch any of the blowouts they have had. So what can I tell you about The U this year? Well, I'm gonna try and take a look at the stats behind their performances this year to give us an idea of the type of team they are. I have no idea how this post is going to go or what it will be about, so work with me.

You would think that a good Opponent Starting Field position would help your own starting field position, but I guess not. So neither Miami or Georgia Tech are helping themselves out with field position. Here are some of the factors that go in to Field Position. These stats are all based on non-garbage time drives against FBS opponents, and are stats for the defense. If the defense forces a lot of punts you probably have better field position than allowing a lot of touchdowns and field goals, is my hypothesis anyways. Actually, we can test this pretty easily. Here are the average starting spots for different reasons of getting the ball from all 2012 possessions:

Wow, so really getting the ball after a score or punt is about the same. The thing that will really help your starting field position is getting turnovers, and forcing teams to punt the ball from deep in their own territory. How good are these teams at doing that?

Wow Miami forces a lot of turnovers. They are 2nd in the nation in Fumble % (percentage of defensive possessions where they recover a fumble) and fumble recoveries are mostly luck. Forcing fumbles is something that defenses can be good at, but recovering them is not. It's a good thing Georgia Tech is doing such a good job of holding on to the ball though, or else we would be in trouble... I'm not sure what this tells us about field position, and what we can infer about this weekend. I think it goes to show you that Miami's defense has done a great job of helping their offense so far, and Georgia Tech will need to limit the turnovers to have a chance.

(Now that is some groundbreaking analysis you guys have come to expect from us here at FTRS!)

I'm gonna make this quick and easy. Here is a chart showing the relative strengths of Miami's and Georgia Tech's in 5 categories; Passing S&P, Rushing S&P, Passing Downs S&P, Standard Downs S&P, and Overall S&P+. You can read a thorough definition of each of those here, but essentially S&P is a measure of both a team's success rate on each play and the equivalent points gained per play. So Passing S&P is a measure of how well an offense "moves the chains" while passing, and how explosive they are while passing. Don't worry about the actual numbers here, just take a look at how Miami and Georgia Tech's offense measure up to each other, and to the average offense. 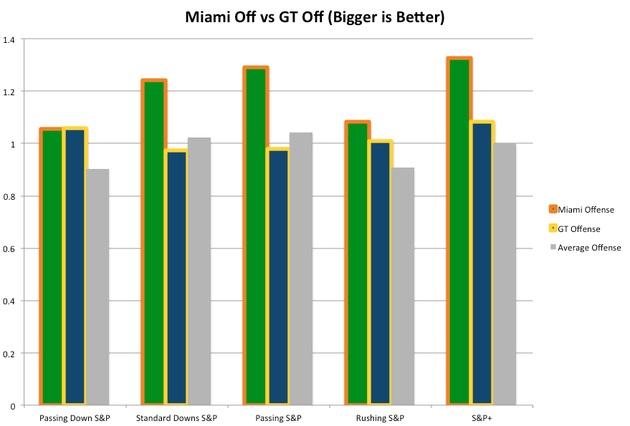 The Passing Down, Standard Down, Passing, and Rushing S&P are not opponent-adjusted. This is just the raw performance in non-garbage time. The only thing Georgia Tech excels at is our Passing Down performance, while Miami pretty much kicks butt at each category, and also receives a huge boost from playing well against Florida, right now rated as the top defense in the country in S&P+. What does this mean? It means our defense is going to have their work cut out for them with this Miami Offense, however forcing them into passing situations can help our defense out. 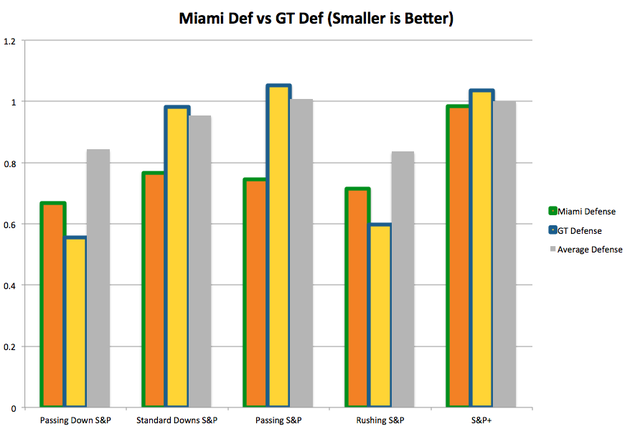 Yes I changed the colors and yes I hate myself for it, I just wasn't sure which would show up better. I could not begin to tell you what is happening with our defense that we are doing fantastically on Passing Downs and Rushing, but worse than average on Standard Downs and Passing....I have no idea. Miami has played solid across the board, but that is where opponent adjustments make a big deal. Miami has performed well on defense this year, but when you take into account the opponents they have faced you see that their performance isn't really all that great, in fact they are 63rd in defensive S&P+ out of 126 FBS teams (That's dead in the middle).

What do you guys think of all of this? What stats would you like to see on each opponent? Did this help you get a "feel" for Miami? Let me know in the comments.