For whatever reason, I have a good feeling about this weekend. How long until it all comes crashing down?

Traditionally speaking, Tech doesn't win in Charlottesville, for whatever reason. It's like if this were a video game, the players' ratings would all go down a solid 15 points upon entering Scott Field. It's weird. This time is different though. Virginia is struggling hard, while Tech is looking to continue building momentum. Jackets roll.

Wake Forest right now is like a little, scrappy, 150-pound fighter going up against a 300-pounder in this one. It makes no sense that they should even have a shot. However, they've scrapped together a 4-3 record, somehow, and Miami is coming off an extremely close call in Chapel Hill. This is a huge line for the Hurricanes to cover. Give me Wake against the spread, but I'll be shocked to see Miami lose.

Pittsburgh has been a really weird team this year, and I'm really starting to think they're not a very good team. I've picked them to cover the spread 5 times, and have been wrong on 3 of them. That makes me hesitant to pick them here once more. However, their rushing defense is fairly decent, and Navy isn't lighting up anyone's radars either. I think this is the game where Pitt tries to man up and make a statement, but I don't see them winning by more than 2 scores. 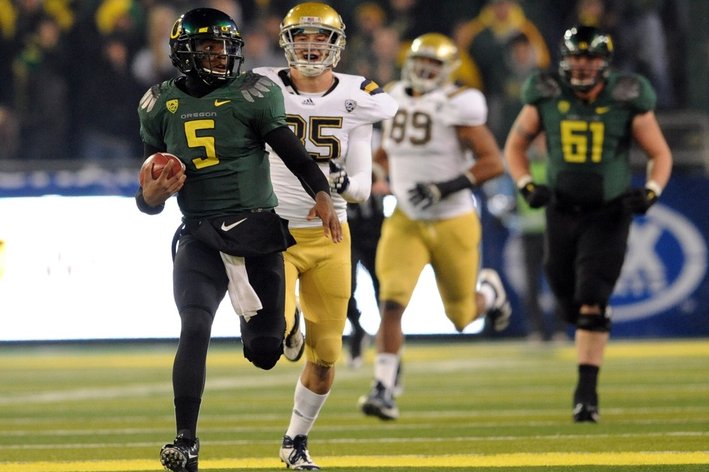 12th-ranked UCLA travels to Eugene to take on the red-hot Oregon Ducks, coming off of a road loss to Stanford last week. Meanwhile, nobody's even touched Oregon so far this year, which is interesting considering they're still in year one under a new coach. UCLA's a good team, but had some weaknesses exposed last week. They'll have similar luck this week. Ducks cover 23.5.

Florida State is wreaking complete havoc on their opponents right now on all fronts, and they'll be looking for revenge after the Wolfpack ruined their season last year. Meanwhile, NC State doesn't have much offense to speak of, and may well get shut out on the road. Seminoles win big.

Maryland has been terrible in conference play, and I have a feeling that Clemson is looking to air some frustrations after last week.

North Carolina is coming off of a nightmarish game against Miami, where they led after 59 minutes and then lost. They've still yet to win since the Georgia Tech game. Boston College has played everyone extremely tough this year, and I have a feeling the Tar Heels might start to quit on themselves.

Eagles cover 7 and win straight up.

Virginia Tech is on something of an inexplicable roll this season. Their offense has been straight-up bad, while their defense is completely dominant. It's all very confusing. Duke's most impressive offensive performance thus far may have been against Virginia last week, and if not it was probably in a loss against Pittsburgh when they scored 55. The Hokies will win here though, and I don't see Duke scoring much against the #2-ranked defense in the country.

Don't underestimate Tennessee here. They've played some good games against some tough teams, and this would be a huge line for Alabama to cover. I'm going out on a bit of a limb here and saying Tennessee covers the 28, but that Alabama still wins comfortably.