The Week that Was for Georgia Tech's Opponents: Week 8

Checking in on our opponent's performance so far this season

Share All sharing options for: The Week that Was for Georgia Tech's Opponents: Week 8

Author's Note: Last week was fall break so I've added some goodies in this post 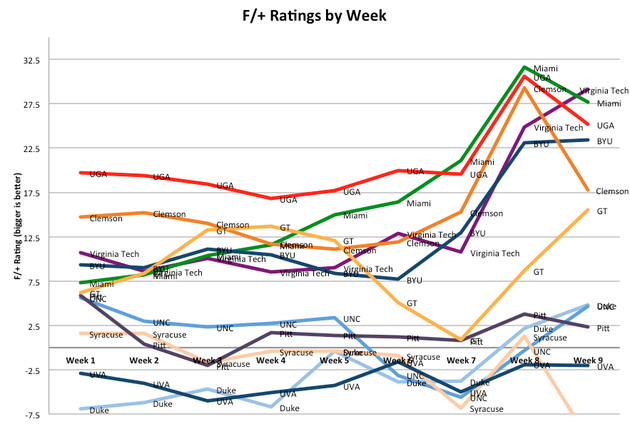 I've highlighted our performance for each team so it is a little easier to comprehend. This table is getting pretty big, I might need to think of a better way to visualize all this. Like I said earlier, look at VT's defense. They have allowed basically no one to put the ball in the endzone consistently against them. It is comforting to me that of the 6 opponents we have played against half of them we were their worst defensive performance. Something to hang our hat on at least. (thanks Bamboo Shaft)

Now we can get into some fun with this chart. We can see that the top 4 teams in ACC play so far are GT, VT, Clemson, and FSU. This isn't overall strength, I'm literally just saying, in the ACC games that have been played those four teams have done the best. But, those teams haven't played the same set of teams, so how do we compare them? Well, one thing we can do is to look at the average of their opponent's "Conference PPD (points per drive) margin".

Wasn't that fun? Now we can say that while we have a high PPD margin, it has actually come against an easier schedule than some of the other top ACC teams. I'll try to do this each week so we can see how the numbers change.

** Author's Note: Fixed some wording because sometime I no speak good