Duff'd It! Rankings and other Accolades, Week 8

Share All sharing options for: Duff'd It! Rankings and other Accolades, Week 8

From the Free Dictionary:

Fiddle while Rome burns: Fig. to do nothing or something trivial while knowing that something disastrous is happening. (From a legend that the Roman emperor Nero played the lyre while Rome was burning.)

The SEC is burning, and the rest of us have suddenly found a thousand things we can do that do not involve putting that fire out, such as doing laundry, washing our car, and hoping this is finally the year the SEC is kept out of the BCS championship game. (It won't happen, of course, but it's always fun to think about.) We'll get to them soon enough, but first let's see who else set themselves on fire this week:

5 Virginia. Mike London says he knows how to win, but apparently he doesn't know how to win against Duke..... except he did beat Duke, back when was coaching Richmond. My head hurts now. Maybe he forgot how win whilst making the transition from FCS to FBS?

4. Northwestern, also known as the Team Formerly Known as Ohio State's best win. The Wildcats got to 4-0 by feasting on out of conference lunch meat, and are 0-3 since - all in Big Ten games - putting them in good company with Purdue! Which really isn't great company to be in. Playing Iowa next week is the cure for everything, though, Northwestern, and by "everything" I mean "having to worry about your defense".

3. Louisville. The AAC conspiracy to keep Louisville out of the title game deepens! This thing is so big, even Louisville themselves seem to be in on it, after losing in the final minute to Central Florida on Friday. Or, maybe Louisville is just preparing themselves for life in the ACC and I need to stop listening to Alex Jones' hot Infowars sports takes.

2. Clemson. Clemson did many things on Saturday night against Florida State, but Clemsoning was not one of them. No, the Tigers merely got their ever-loving asses whipped in embarrassing fashion by a very very good team. Clemson is still a very good team themselves, and there's nothing at all to suggest this won't spark a tailspin that ends with them finishing the season 8-4, nope, no precedent for that at all.

1. The SEC. MAH GAWD EVERYTHING'S ON FIRE. (Edit: so many losses I forgot LSU losing to Ole Miss. Duff'd it!) Georgia losing to Vanderbilt! South Carolina losing to Tennessee! Texas A&M losing to Auburn! Florida losing to Missouri, which technically isn't even actually an upset but it feels like one because seriously Mizzou is 7-0 and has more than a decent chance of going to Atlanta. Everything is upside down in the SEC, and I understand if you feel lost and confused, SEC fans. But it's okay, your savior is here to guide you. 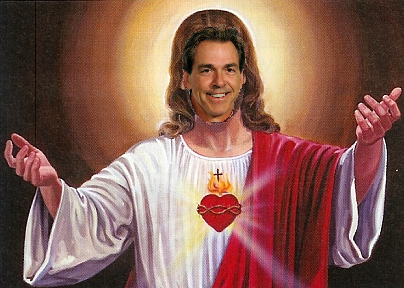 Nick Saban will take you back to the promised land.

HELMETERCEPTION. This is eventually what happens when you put your hand-symbol logo on your helmets, Miami. Eventually some offensive lineman's head gets mistaken for a wide open receiver. Miami spent most of Thursday doing anything but beating the ever-living daylights out of North Carolina before finally turning the lights out on Zero Dark Thursday (......sorry), and Stephen Morris's channeling of Jacorry Harris certainly didn't help things.

Honorable mention: THE SLIPPING KICKER. Automatically disqualified as this wasn't a play. 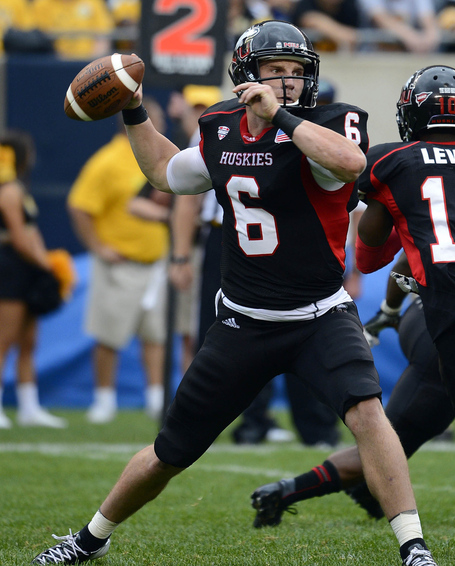 All hail the one-man MACtion show! 155 yards and one touchdown in the air, plus 316 yards and three touchdowns on the ground! Lynch outscored and nearly outgained Central Michigan all by himself. His versatility put him above Oregon State's Sean Mannion, who to his credit threw for 485 yards and four touchdowns to a bevy of open receivers, thanks to a Cal defense that did not seem interested in stopping him.

So congratulations again, Jordan Lynch! If you win three more EotMotW awards you can trade them all in for a non-AQ BCS birth. (It's an obscure rule, but it's in there, trust me.)