Duff'd It! Rankings and other Accolades, Week 7

A WEEKEND FULL OF DELICIOUS CARNAGE

Share All sharing options for: Duff'd It! Rankings and other Accolades, Week 7

This weekend in college football was one of those that just make you feel so ALIVE. So many upsets! So many title hopes dashed! So much opportunity for another premature field storming by the Utah student section! Let's run down the best of the chaos:

5. Washington State. The Cougars were actually leading Oregon State 24-17 late in the third quarter before deciding the key to victory was just giving the ball over to the Beavers, which they did on their final six drives of the game. (As you may have already guessed, this is not the key to victory in any game, unless that game is some bizarre mashup of football and hearts where the football is the queen of spades.)

4. Georgia. When you take away the top five playmakers from pretty good team, that team suddenly looks rather pedestrian. Weird how that works! Georgia almost pulled out the miracle win anyway, because they are Georgia, and pulling out miracle wins is what they do, but then in the 4th quarter Gary Pinkel remembered he joined the SEC and not the Big Ten thanks to some flashy moves on offense and Aaron Murray running out of players on his own team to pass to. With the win, Mizzou became the first SEC team to be bowl eligible and no shut up you did not see that happening.

3. Florida. Big dumb Will Muschamp doesn't see any use for such flashy things as "offense" and "touchdowns". The Gators are perfectly happy to score a couple of field goals and then choke the life out of you on defense. It didn't work against LSU, of course, but they've gotten this far relying on it, damn it, and they're not changing now.

(By the way, if you want big dumb Will Muschamp football taken to its logical and arguably more successful conclusion, look at USF. They've won the past two games without scoring a single offensive touchdown! This is legitimately terrifying.)

2. Michigan. The Wolverines had spent the last few weeks living dangerously, eking out wins over Akron and UConn, and it finally caught up to them Saturday in State College. Penn State gave Michigan plenty of opportunities to win the game, too, but each time Brady Hoke took a look and said "Nah, we're good. Bring the punt/field goal team out!" Play for kicks and you get kicked, Brady Hoke. Penn State won because they went for it on 4th and 1 in quadruple overtime.

1. Oklahoma. This was your big moment, OU! You had a chance to deliver a fourth straight humiliating defeat to Texas, putting the final nail in Mack Brown's coffin in the process, and you totally blew it! This means next year he'll be back to.... suffer another humiliating defeat at the hands of the Sooners, probably. Huh.

Wait..... could it be? Did OU throw this game to keep Mack Brown around as their punching bag for a few more years? Is it possible that, by winning, it was actually Texas that duff'd it? Woah.

Fox Sports 1's Kristina Pink was out redefining "Reporters Without Borders" in Los Angeles last Thursday. All's fair in love, war, and football, and - well actually there's a lot of thing that aren't fair in football, like hits out of bounds, but you are fair game if you stand just outside the boundary on the line of scrimmage and face away from the field.

Sam Irwin-Hill took a deep breath. The 77,000 spectators at Razorback Stadium didn't know what was about to happen, and neither did the 11 white-clad Gamecocks opposite of him. Only he knew.

Irwin-Hill was going to take that ball and run with hit. But as he took the snap, everything suddenly changed. Perhaps throwing the ball was a better option? But perhaps not. Time was running out. He would run. No, he would pass. No, he would run! No, he would.....

The ball sailed out of bounds. Arkansas wept. 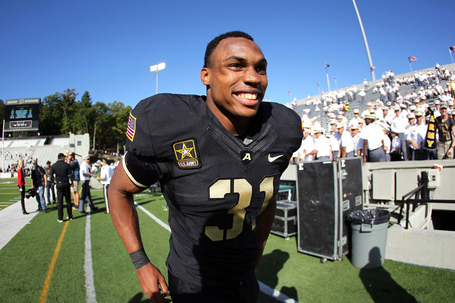 Terry Baggett did more work in three hours on Saturday than Congress has done since the shutdown started. (I can't believe that joke is still topical!) Baggett carried the ball eighteen times for 304 yards and four touchdowns, averaging an eye-popping 17 yards a carry. Your Duff'd It! rankings thanks you for your service, Mr. Baggett, and your EotMotW award will arrive once the government gets up and running again. (So, make some plans in the meantime.)