The Jackets travel to Provo with their season on the line to take on a team that made them look like an average high school team last year on Homecoming. BYU opened as a 4-point favorite, and everyone jumped on it, driving the line to almost a full touchdown. Last week I picked Miami to cover 5.5 and they did. This week though, I'm a believer. I'm a foolish believer in the idea that this is the game where we save our season, not because we have to, but because we need to.

To be quite honest with you, I don't know how the Hokies are doing it this year. They actually remind me of Florida in the last couple of years, with a defense built to withstand the apocalypse, and an offense whose greatest strength is not losing the game for the defense. The Hokies rank 95th nationally in scoring offense, and in the same range in both passing and rushing offense. THEY ARE A DISASTER. No worries though, they'll beat Pitt and its decent-but-not-deadly offense at home, and probably in comfortable fashion.

Navy comes in at 3-1 to take on a 3-2 Duke team, having beaten Indiana (of Penn-State-defeating fame) in the first week of the year. Meanwhile, Duke has won 3 games against NC Central, Memphis, and Troy, while serving as a punching bag for conference foes Georgia Tech and Pittsburgh. Silly as it might be, this is probably a must-win for David Cutcliffe moving forward, and already having faced a higher-functioning version of Navy's offense will help.

Agree with all picks except 1—FSU wins a close one but does not cover.
--jabbajacket last week

I think Maryland is underrated and FSUs freshman QB is a little overrated.
--071u last week

WHERE IS YOUR GOD NOW, READERS?

Sorry, just needed to gloat for a moment. Virginia's a pretty bad team and going on the road to take on a team looking to vent some frustration. Can't help but take Maryland in this one.

Ever get the feeling that NC State takes a team vote each week on how hard they want to try? They put a scare into Clemson, then scored 48 on Central Michigan, and then scored 13 in a loss to a Wake team whose other wins are against Army and Presbyterian. Meanwhile, Syracuse is fresh off of a reaming at the hands of Clemson and is yet to win against a formidable opponent. 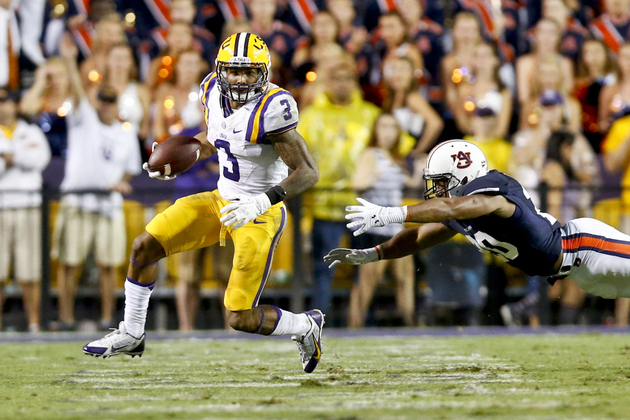 It's not easy to go into Death Valley and win, that's just a fact. As a rookie QB, it's less easy. I realize Florida's defense is awesome, but so is LSU's offense. Tigers cover 7 at home.

Clemson's at home, hot as they come, taking on a Boston College team that just straight up won't be able to hang with the Tigers blow-for-blow. I'll be shocked if the Eagles cover.

Rutgers comes in at 4-1, fresh off a 55-52 overtime victory against SMU. They lost the season opener to Fresno State, also in overtime, and their other wins have included Norfolk St, Eastern Michigan, and a pretty bad Arkansas team. I don't see them hanging with Louisville on Thursday night in Papa John's Stadium

It's really a mystery to me how USC is favored in this game. How does it make sense? They've already fired their court jester head coach and are coming off a nasty, 3-touchdown loss to Arizona State a couple of weeks ago. I think this is the game where Arizona makes a statement against a depleted USC crew.

Wildcats cover 5.5 and win straight up.

Those are my picks, readers. What are yours?