Duff'd It! Rankings and other Accolades, Week 5

Share All sharing options for: Duff'd It! Rankings and other Accolades, Week 5

After the last couple of weeks in college football, this week in Duff felt like walking out of the desert and being served a tall glass of ice water.... immediately followed by a gigantic pitcher of margaritas, because holy crap y'all it's not even October yet and coaches are already getting fired! I always like to imagine such firings go like this - which, in Lane Kiffin's case, is probably more accurate than anyone would believe.

5. UConn. After losing 41-12 to New York Buffalo, UConn were forced to sacrifice now former head coach Paul Pasqualoni to the Buffalo gods of Buffalo. Farewell, Paul Pasqualoni; may your stare one day return to haunt us again, like from another NFL coordinator position or something.

3. Georgia Tech. We were wondering how long you'd string us along, Tech! The Jackets' offense was rendered hilariously inept on Thursday as Bud Foster's defense mauled their offensive line like maroon bears and limited them to 129 rushing yards and an abysmal 7 for 24 passing. But it's okay, because before our next tough game we'll play..... no one, because our next two games are at Miami and at BYU. Freakin' awesome.

2. Oklahoma State. The Cowboys didn't just lose to an unranked West Virginia team, they lost to an unranked West Virginia team that lost 37-0 to Maryland the week before. Suddenly the Terrapins have a decent shot at being transitive Big 12 champions. Meanwhile, Dana Holgorson is busy clearing out all the Indian casinos in Oklahoma and being named chief of multiple tribes. It doesn't generally work that way, but it does when you're Holgo.

1. USC. We all knew this day would come, and yet secretly I was hoping it never would. Lane Kiffin was fired after.... well, a bunch of shit, really, but the final straw was letting USC get lured into the desert and allowing some of their spare organs to be stolen by Arizona State. A 62-41 loss to Sparky was deemed unacceptable by the top brass at USC, although apparently taking your coach off the team bus and making him take a cab home is still totally cool. Supposedly the decision was made during the third quarter of the game, so at least they decided to be nice and not publicly execute Kiffin immediately after the game?

As if Bama-Ole Miss hadn't gone bad enough for the Rebels, at some point the refs just started using their players for target practice. Five points for hitting the numbers, ten for the helmet, and ALL OF THE POINTS if you land one inside the facemask.

(Serious note: C.J. Johnson did have to go to the sideline and get his eye checked out by medical staff after this play. He was okay.)

Honorable mention: TWO YARD PUNT. Complementing the good football being played in Tallahassee and Miami is the terrible, awful football being played in Tampa and.... Miami. (Sorry, FIU, you already knew you can't escape our gaze.) Most punts this terrible have some kind of mitigating circumstance, like gale force winds or a simple missed snap, but this one is just pure punter derp. Helpful advice: you want to kick off the foot, not the shin. As you likely already guessed, this game did not end well for the Bulls. Hey, remember when USF declared themselves the newest member of the newly minted Florida Big 4? 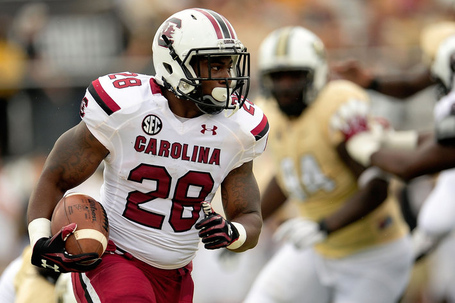 Temple's Tyler Matakevich recorded Suh-like tackle numbers against ronin program Idaho, with 20 solo tackles and 4 assist, but there is the minor issue issue of the Owls losing to the Vandals. So instead the honor goes to South Carolina running back Mike Davis, who overcame the lurch of late Florida mornings that affect so many and rushed for three touchdowns and 167 yards in the Gamecocks' nail-biter over UCF. Congratulations, Mike Davis; your EotMotW voucher can be redeemed for one new set of golf clubs for Steve Spurrier, who destroyed his previous set this weekend to help forget his team was held scoreless at halftime. By Central Florida.