Comparing Bowls versus other Postseasons

A breakdown of the I-A bowl system versus other postseasons in NCAA Sports.

Share All sharing options for: Comparing Bowls versus other Postseasons

I wanted to compare March Madness and the Division I-A bowl system earlier today so I compiled data all the way back to the first March Madness in 1939. Back then, there were only the Sun, Orange, Cotton, Rose, and Sugar Bowls. The first March Madness had 8 teams in it. Now, there are 35 bowl games versus 68 bids to the NCAA Tournament, 32 bids to the NIT, and 48 teams to lesser tournaments. Straight up, we are comparing 70 teams in the "postseason" to 148. Over 58% of all I-A football programs made it to a bowl in 2012 while only 43% of all hoops programs made it to the tournament in 2012.

Since 1996, the number of bowls increased from 18 to 35. If we compared bowls to the even more exclusive postseason of I-AA football, we'd see a horrible picture for bowls. The I-AA Tournament increased from 16 to 20 teams in 2010 but had not increased its total team allowance since 1986.

I don't want to totally bash bowls though as the bowl season has seen contractions. Since 1939, the bowls have been contracted 9 times. March Madness fluctuated up and down 5 times from 1959-1966. This is a small victory for the bowl postseason considering their last contraction was at least in the modern era (1996 bowl season cut two bowls from 1995 total). 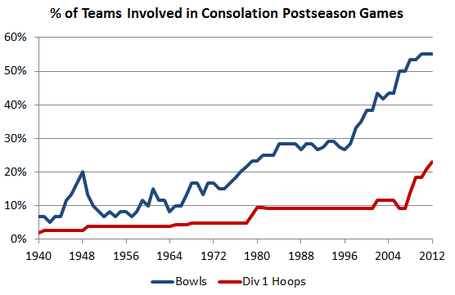 The issue I really have with the I-A postseason is the irrelevance of roughly 90% of all postseason games. Its like every team in the country is playing in March Madness' infamous 3rd place game. Up to 1981, teams played a meaningless 3rd place game after their Final Four losses in March Madness. Thankfully, the Humiliation Consolation Game was cancelled in 1982. But now we have 34 Consolation Games in college football. Hell, the NIT and CBA are the new consolation game so hoops is not completely blameless but the difference is the sheer percentages. Literally none of the bowls matter while at least 46% of the teams in hoops have a road to the National Championship.

I have no proposition for a fix. I just want to state the obvious: Bowls have become as relevant as 3rd place consolation games in the old March Madness tournaments. I want Tech to win its bowl game every year but I do not get mad if we lose. Why should I? There is no title lost and almost all payouts are equal for participation now. What are your thoughts?