VPI vs. UVA Gameplan: Playcalling by Down and Distance

Share All sharing options for: VPI vs. UVA Gameplan: Playcalling by Down and Distance 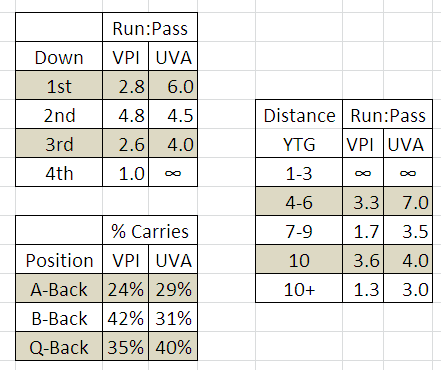 After watching Georgia Tech play three games this season and watching Virginia Tech struggle mightily offensively in all of their games, I find myself asking, "Why did we lose to the Hokies?" on a pretty regular basis. The first answer I found through breaking down the difference between our playcalls/reads versus VPI versus UVA was a heavy lean on the pass. Tech tried to focus its efforts through the air to keep the Hokie defense off center. Tech's run:pass ratio against UVA was double its effort against VPI on first down.

The other interesting fact about our VPI was game was a heavy emphasis on the B-Back. The B-Back position had more carries than the A-Backs and QB's meaning smaller gains per carry. Low risk, low reward type plays. As opposed to UVA, A-Backs had almost as many carries as the B-Backs. We took risks against the 'Hoos and they paid off. A conservative approach against the Hokies was effective in finding their weaknesses but unfortunately our gameplan took an entire half to come to fruition.

As we start the season, we also see how the positions have been featured by down and distance. The QB's bear the brunt of the short yardage downs followed by the fullback dives and the tosses. The following charts display data from UVA and VPI. PC was excluded for obvious reasons. 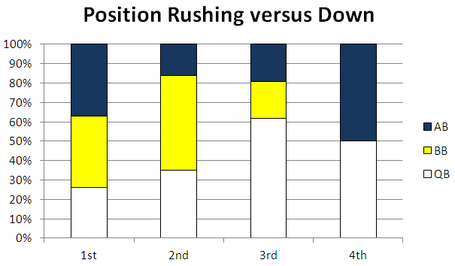 The position versus down chart is almost formulaic. 1st down = A-Back, 2nd = B-Back, and 3rd = Quarterback. We have mixed it up but a defensive coordinator could play the odds at this point and have a pretty high success rate. The position versus distance chart will show a similar trend. A-Backs are almost exclusive to long distance downs. The key for CPJ will be mixing it up as the season progresses. 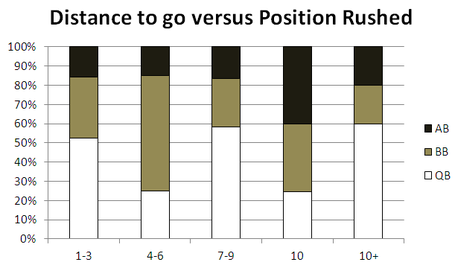 The data is only from two games but it tells some pretty interesting stories. Any thoughts?