Game Report: Some of The Best Sweet Tea in Existence

Share All sharing options for: Game Report: Some of The Best Sweet Tea in Existence

Hey everyone. First of all, WOW. 56-20, I did not see that coming. I thought we were going to do well, but not like this. Lets go through some of the strengths, weaknesses, and stats that I found intriguing from my new favorite spot in Bobby Dodd: the press box. 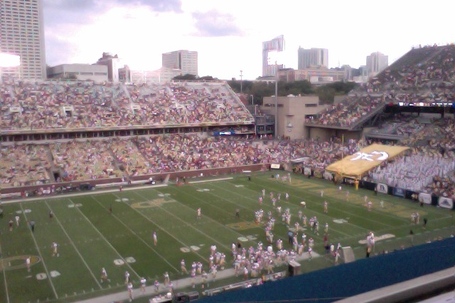 Beats the shit out of the student section. Also, the free sweet tea is AMAZING.

We did what we do best: running the ball efficiently. We had 50 rushes for 461 yds, 9.22 YPR. That's the biggest tell that this offense is working to me (conditional on points being scored, obviously). Also of interest: Tevin was 6-8 with 133 passing yds. Tevin looked great in the pocket, even when it collapsed on 1st and 21 and he was in our endzone. During the postgame interview when I asked him about it, he said that he'd been doing drills with coach Bohannan all week, and had a lot of confidence in his offensive line. He really redeemed himself and inspired confidence in me to that end today. His decision making was questionable at the pitch occasionally in the first half, but he showed improvement on a score at the beginning of the 3rd quarter in which he looked upfield and saw the coverage on the pitch man and took it in himself.

The whole "back by committee" thing worked out pretty well too. 4 players had significant rushing yards by the 3rd quarter, and 3 of those had touchdowns. Laskey hurt his shoulder in the middle of the 2nd but otherwise had a stand-up day in the middle of the line (4.5 ypc). He was replaced by Broderick Snoddy, who preformed with similar aptitude and actually broke a few nice runs. Vad Lee was the usual bright spot in the 2nd string, rushing for 59 yards on 8 carries. He also kept making plays with his legs and made something out of nothing several times, evading UVA linemen that seemed to clog up the lanes and get some yards.

The bad, however, was also present, although not in force. There was some screwiness with the new helmet rule, taking Tevin out twice on the goal line. It didn't make much difference, as we scored both times, but against a bigger better line that might have been the difference in the game. The blocking downfield was sometime weaker than last year, which surprised me a little considering Waller's physical prowess. Other than that, everything seemed to flow pretty well.

My God. Seriously, anyone who said Groh needs to be fired needs to apologize and go cry in a corner, now. There were two things that stood out to me today: the D-line play and the tackling. The linemen were fierce, shedding blocks and getting to the ball quickly. The hand work was in particular a sight to see, Barnes and Green came out of their stances with hands flying, often turning their men and getting straight to Rocco. Cross was also impressive and kept his man occupied letting the pressure guys (often the safeties or corners, Groh was channeling his inner John Tenuta today) get to the ball the whole game. Everyone else swarmed to the ball like bears to a beehive (ironic simile, no?). It was seriously impressive. The secondary was solid as usual, except for two plays late in the 4th where a UVA WR got behind the corners and scored on a great catch. That was also on the second stringers though, so it shouldn't be a HUGE source of concern. Jamal Golden had a great pass break up that saved a huge fourth down, and Isaiah Johnson was a ball hawk on a busted play action. Overall, the D showed some great strides and some laser focus.

How did Groh do it, you might ask? What was the change from last year? Well, Groh got the defensive players together last night at the team hotel and showed them a clip of the Haggler-Hearns match from 1985, which in Louis Young's words "got us real excited for the game." Quayshawn Nealy told the media that "that fight last night, it really had a big impact on the game. Guys really took it heart." That's some fine coaching right there. HOWEVAH, there's a catch. UVA failed to reached 300 yds of total offense for the second straight game. I don't know what that says about ours or PSU's defense, but it sure does tell me that UVA's offense kind of sucks. So I guess I shouldn't be burning the barn down just yet, but I sure am excited. Even with a few crappy punts, this was one of the most complete games I've ever seen this team put together.

I'll be back on Monday with a statistical analysis and breakdown, see you then.