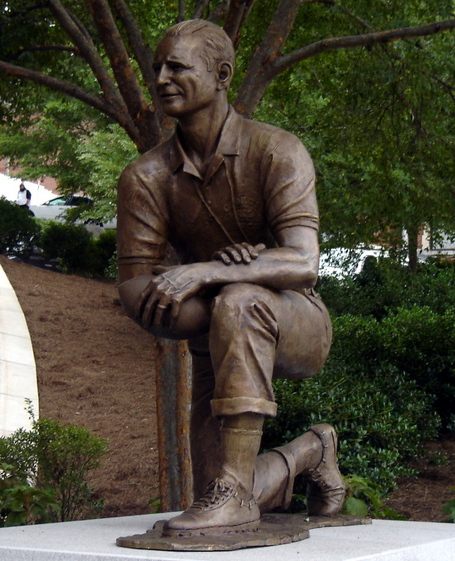 This afternoon I had the pleasure of attending a ceremony in Callaway Plaza, where our new statue of Bobby Dodd was unveiled. In attendance were most of the '52 National Championship team, Coach Dodd's Son and Daughter (and their families), President Bud Peterson, AD Dan Radakovich, Head Football Coach Paul Johnson, "Voice of the Jackets" Wes Durham, the Ramblin' Reck, the Georgia Tech Glee Club, the Cheerleading Team, and, finally, Buzz.

It was a beautiful ceremony where we were able to hear from President Peterson speak about Tech traditions, and how while the Reck, George P. Burdell, and the Whistle are the more famous traditions, a tradition of excellence is also one that Georgia Tech prides itself in (on a less traditional note, our freshman class this year was 35% female). He followed AD Dan Radakovich, who spoke about the creation of the statue. It took 18 months of work and preparation from a group of players from that '52 team who call themselves the "Dodd Boys". He also mentioned how our own Paul Johnson won an award named after Coach Dodd in 2004 -- the Bobby Dodd Coach of the Year Award.

Taz Anderson's speech and photos, after the jump.

The final speaker of the ceremony was Taz Anderson, who played for Coach Dodd and went on to play professional football for the St. Louis (sic) Cardinals and the Atlanta Falcons. He began by introducing the Dodd Boys, describing their desire to do only one thing: suit up in the white and gold again and run out onto Grant Field..."Although I doubt all the tape in the world could get us to the 50 yard line." He spoke of Dodd as "such a classy guy". He talked about how Coach Dodd understood that the players probably wouldn't make a career out of playing football, and that the value of a Tech degree to them was priceless. He made sure that they had a fancy team banquet, to introduce them to a formal atmosphere, and "where all those forks and knives went". He always reiterated to his players "We'll beat them. You're too smart for them." He mentioned a time that they were to play Clemson, whose players were bigger and stronger. The strategy in the game? "Don't waste too much energy warming up. We'll run the 18-19 (sweep play) over and over, and come the 4th quarter they'll be tired and we'll figure out a way to win."

Coach Dodd sounds like a great coach and a phenomenal man. I'm sure that anyone who knew him benefited greatly from it, and I wish I had a chance to know him myself. I'm proud to say that I'm associated with a man who represented my Institute in as impressive a fashion as he did.

Anyone out there ever have a chance to meet Coach Dodd? Any readers ever read his book? Excited to see this statue each time you visit Callaway Plaza? 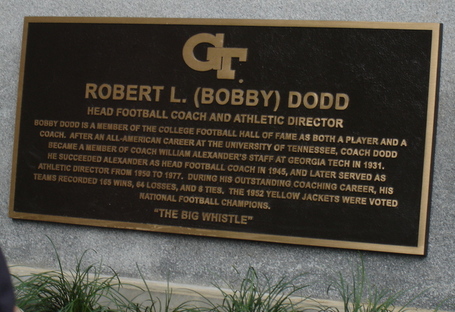 The plaque found at the bottom of the Bobby Dodd Statue.

Some of the players and their families, with Coach Dodd's daughter and son on the right. 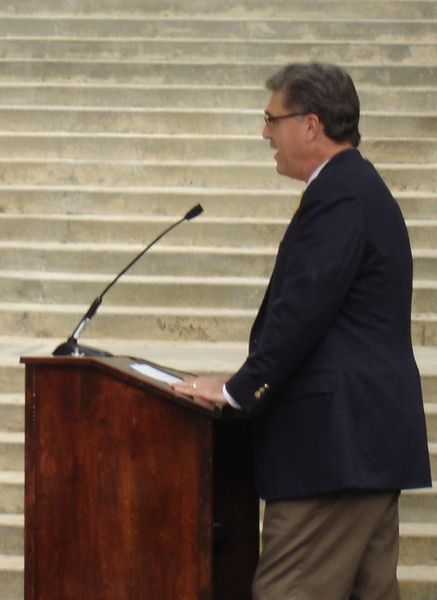 AD Dan Radakovich began the ceremony with a speech about how the statue came to be. 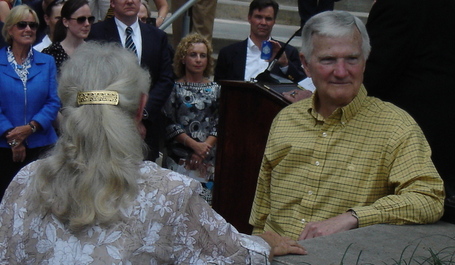 Coach Dodd's son and daughter, waiting for the statue to finally be unveiled. (Yes, I am a terrible photographer. It happens.) 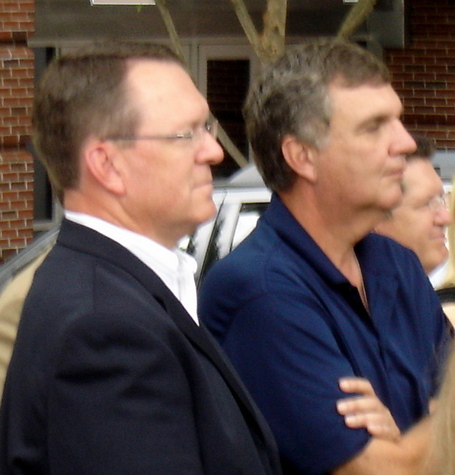 Coach Johnson and Wes Durham listen intently as the ceremony kicks off.

The ceremony began and ended with performances from the Georgia Tech Glee Club. Needless to say, when the fight song came about, there was a very large "TO HELL WITH GEORGIA" cheer. Some things never change.