Georgia Tech Fan Day: Some Serious Fun on the Flats

Share All sharing options for: Georgia Tech Fan Day: Some Serious Fun on the Flats

Myself and the man himself, AD Dan Radakovich at GT Fan Day 2012.

I had the privilege of attending GT Fan Day on Saturday, and while I was there I was able to conduct interviews with a few players and sit in on Coach Johnson's press conference. I took some neat photos too, so please sit back, relax, and join me on my journey to fan day! 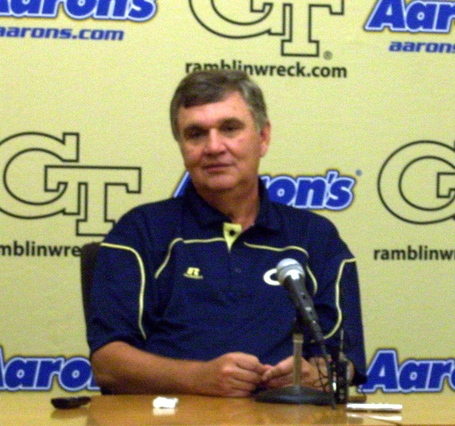 Always thrilled to talk to the media, that Paul Johnson.

I started the day by entering into the Edge Center and sitting in a conference room with a number of reporters (all the guys I read -- Ken Sugiura, Kelly Quinlan, etc) for Coach Johnson's press conference. He had some great insights to this season, saying that the team has had a phenomenal offseason and that the attitude is one he's very impressed with. He's excited to get them started in Blacksburg.

Some more things he and the players talked about, as well as the rest of my Fan Day experience after the jump!

Johnson spoke to the great talent that we have at the A-Back position. He sees Orwin Smith on the field most offensive plays, and beyond him there are 5-6 guys that need to see time, including B.J. Bostic, Tony Zenon, Robbie Godhigh, Deon Hill, and Dennis Andrews -- he also directly alluded to Synjyn Days getting into the mix.

He mentioned that Adam Gotsis is progressing well in adjusting to life at Tech, though there are some slight cultural differences (apparently he'd never seen a Philly Connection before when they got the food after practice one day).

Fred Holton's return will be very welcome, he's a "big body" who can be really effective if used in the box. Said he's big for a safety and tackles really well -- hopefully we see him make a lot of impact.

Brandon Watts will start at OLB opposite Jeremiah Attaochu -- kid's an interesting case as one who played QB in high school, then started at Tech as a safety and has since moved to linebacker. He brings lots of speed and athleticism to the position, which is always welcome, and his experience will also prove to be a strength.

Johnson spoke to the size of WRs that we have being a strength. Darren Waller being 6'6" with speed, and Jeff Greene being an imposing 6'4" with speed (also wears a Size 15 shoe, for what that's worth). The freshmen, Jeremy Moore, and Chris Jackson have all looked good so far in shorts, so CPJ isn't too worried about the production there.

Our O-Line depth is really incredible, in that we have 8-9 players who have started a few games. Also very young -- Uzzi is the only senior. We have 4-5 guards and tackles (each) who will likely rotate and see playing time.

When asked about how much bowl game layoff affects timing in the offense, he mentioned that he didn't think it had much effect (if any) and that when at Navy they had 2-3 years when they were setting offensive records in bowl games. We should have won last year but gave up 14 in the last 7 minutes of the game after missing 3 field goals, and then should have won the year before but made an awful lot of mistakes (especially surrounding special teams).

Lastly Coach Johnson talked about us having lots of DL depth, mentioning that all of the 4 freshmen at that position could see playing time (Gotsis, Gamble, Chungong, Kallon). Each have lots of physical talent (namely Gotsis and Kallon in particular), so we'll look to coach them up and get them to make contributions where needed.

Had a fantastic conversation with the one and only Jeremiah Attaochu.

Following Coach Johnson's press conference I was able to go and talk to a few players out in the museum area. Here are some quick notes from those conversations.
Jeremiah Attaochu: I asked what guys have really impressed him that we don't know about yet, and he mentioned Tyler Marcordes over and over again. Says the kid is really smart and picks things up very quickly -- he expects him to get some playing time this fall. He said he and Logan Thomas are cool now and have been Tweeting and texting each other from time to time (user The_GT_LineageX11 quoted him as responding to a question about punches being thrown this year with "No sir!"). He said he had fun at ACC Media Days, and it was just a really cool experience being around all of the media folks. Finally he said this has been the best offseason he's been a part of yet. Said morale is high and everyone has been working really hard -- much harder than last year, even. Attaochu looks really big, his arms are incredibly muscular and he generally looks really imposing.

T.J. Barnes: He's played a lot and grown a lot in his time at school and is excited to finally be at center stage for his position (no puns intended). He's grown up a lot in his time at college and seems to be quite proud of how far he's come. He loves Coach Sisk and said he's been effective in that he targets individual position groupings for different drills as opposed to the team as a whole. Overall he's just really anxious to get out there tovshow himself and everyone else what he can do. Interesting fact: When he got to school, his nickname was "Big Baby" because he had somewhat of a baby-face while also being, well, big. Barnes indeed looks very big (at 6'7", 300+lbs, how could you not), while not looking like he's carrying too much bad weight -- looks like Coach Sisk has done him quite a bit of good.

David Sims: Relatively smooth conversion to B-Back from Quarterback that's seen him only put on a few pounds. Said he's roommates with Charles Perkins (you didn't think you were getting through this article without a mention of him, did you?) and that they're good friends who cheer for each other. Really hopes that the two of them, Tevin, and Orwin can all see time on the field together (which to me implies Charles would be at A-Back). Dude was looking pretty big, and said he weighs in around 230lbs.
Jay Finch: I initially asked him about the Goon Squad, and he said that it initially started as a rallying cry to get through summer but now has evolved into something of a mindset for all of them. He tells me that the line has great chemistry and eats together every Thursday night at a different restaurant (apparently he's found his new favorite to be Mary Mac's Tea Room over on Ponce, and that he's got a newfound love for fried green tomatoes). He considers Sean Bedford to be a mentor, as could be expected.

After "interviewing" the above players (I'll admit, it was total amateur hour for me in there), we were able to head out to the field where the fans were just entering. I grabbed a poster and walked over to have it signed by some guys. I got it signed by Rod Chungong, who when asked if he was enjoying Tech so far replied with, "It's HOT!!!" Which I guess means it's a good time....a very muggy, sweaty good time. My poster was signed by the entire linebacker corps, and when I turned around to go to another table, the lines were enormously long and my motivation was running on fumes. So I need to get it signed by as many folks as possible, though unfortunately that may take a while. Got to hang out with a friend of mine and this year's Reck Driver, Stephen Webber (along with fellow Reck Club member and friend John Noojin), and got to see a picture of Paul Johnson holding a baby whose head he'd just autographed....yes, that really happened. 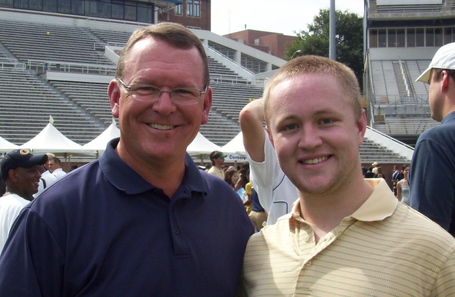 Before leaving, I got a picture with the Voice of the Yellow Jackets himself, Mr. Wes Durham, as well as the man responsible for the day as a whole, Athletic Director Dan Radakovich.
All in all it was a fun day and a great experience. But this is just my tale. Who out there came out and had Fun on the Flats, and what was your autographed haul from the day?