I decided that it would be fun and interesting to run season simulations of this fall using EA Sports' NCAA Football 13, in an attempt to find out what to expect this fall (and also to have something to compare the actual results of this fall to). It certainly did not disappoint.

Before I get into the results, here are a few notes on what happened:

1) I ran 5 simulations. The first four, I was the head coach of Georgia Tech. In the fifth, I changed to UMass to see if there would be a difference when I was not in control of Tech.

2) Each of the first four simulations used a different combination of difficulties for gameplay and recruiting. The difficulties chosen were either Varsity or All-American, which is a 2/4 or a 3/4 for those not familiar with the game.

3) I did not skew the results whatsoever. What you see is what actually happened. I would not have made this stuff up if I could. You'll see what I mean in the results.

Results and brief discussion after the jump!

The results were as follows: 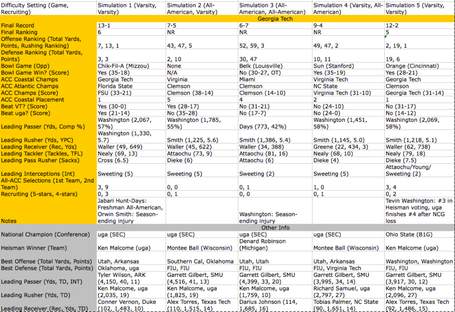 Clearly there was some inconsistency from our performance, but here's some good news:

Here's some other weird things to come out of it:
How does all of this make you feel? Think it's time to start gearing up for georgie's rushing attack? Think there's some legitimacy here, or do you think we'll be laughing at this come season's end?

This post was sponsored by EA Sports NCAA Football 13. Check out the video for the game below.