The following is an official press release I received from Assistant Athletic Director Dean Buchan concerning Center Jay Finch being named to the Rimington Watch List this morning. Enjoy! 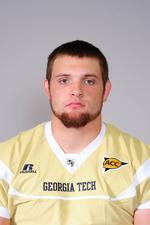 THE FLATS - Georgia Tech junior Jay Finch was named Tuesday to the Rimington Trophy preseason watch list as one of the top centers in college football.

The Rimington Trophy, which has 51 players on its watch list, goes annually to the nation's best college center.

Entering his fourth year in the program, Finch has become a vocal leader for the Yellow Jacket offensive line and a top performer in the weight room.

Finch is one of five players from the ACC on the watch list.

Since its inception, the Rimington Trophy has raised more than $2 million. The 12-year old award is overseen by the Boomer Esiason Foundation, which is committed to finding a cure for cystic fibrosis and has raised over $100 million for CF research.

Dave Rimington, the award's namesake, was a consensus first team All-America center at Nebraska in 1981 and 1982, during which time he became the John Outland Trophy's only double winner as the nation's finest interior college lineman.