Share All sharing options for: Commitment #7 is DE Kevin Robbins 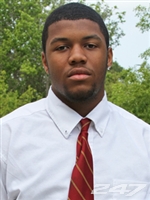 Does he remind anyone else of Nesbitt? (via blogs.ajc.com)

Saturday evening the Jackets received word that their seventh commitment would be DE Kevin Robbins, of Bishop McNamara HS in Forestville, MD. If that high school and town sound familiar, it's because it's the same place that fellow commitment DT Darius Commissiong calls home. He says that Commissiong's commitment played a role in his commitment, though not a major one. Robbins stands at 6'4", 240lbs, and although he's been listed at DE in high school, he's expected to play outside linebacker, particularly the role that Jeremiah Attaochu currently plays (Jack, which is the hybrid pass-rush-focused spot if I'm not mistaken). I find this interesting because you have a linebacker who Groh recruited out of the greater DC area, who's looking to replace one of the best players Groh has recruited to the Flats, also from the greater DC area (a pretty cool pattern to have as a side effect to the hiring of Coach Al Groh). Robbins is the son of a Michigan State alumnus, and had them along with UNC and Rutgers as finalists (interesting that there were no in-state/local schools). He listed reasons for coming to Tech as the academic quality and the "feels like home" atmosphere, two things that we hear a lot any more from commitments.

Another comment on Robbins' commitment and its relation to our team's culture after the jump!

With the commitment of Kevin Robbins following that of Commissiong, that makes for two sets of teammates that Tech has successfully recruited (the other being Shamire Devine and Jeremi Hall), and the third in two years (after Michael Summers and Freddie Burden last year). This is an interesting trend in Tech's recruiting, and I think it has a pretty big hand in that "feels like home", "family" atmosphere to be bringing in guys that already like each other before committing. It seems as though the kids that we bring in tend to bond very well amongst those their age, as well as with the rest of the team. (Quick story: As an orientation leader last summer, all of the freshman football players walked into one of our events one time with remnants of having been covered in shaving cream on them, from where they had been ambushed by the older players. Sounds like hazing to some, but sounds like bonding and fun for the team to me.) I really like the fact that our team has such fantastic chemistry, and I also think that it has an effect on the type of players that we're able to recruit, as it says a lot for a kid on a visit when their host is able to pal around with 30 other players that they genuinely like.

I also think it's a bit of a testament to the crap in recruiting rankings, in that it doesn't seem to me like the odds would allow for many cases of 3- and 4-star players who are teammates in high school (at least in my experience), though that isn't to suggest that the talent isn't on teams whether or not Rivals/Scout/ESPN recognize it. I chalk this one up as another tribute to our fantastic talent evaluation performed by scouts.