GT Baseball Season in Review: The Most Confusing Season In Years

Share All sharing options for: GT Baseball Season in Review: The Most Confusing Season In Years

Well, Yellow Jackets, it was a fun ride. We had our ups and downs, our laughs and fuck Clemsons, but now its all over. Herein we present the 2012 Joltin Jacket season in review, and boy was it an emotional doozy. Almost as much of a roller coaster as football, if you can believe it. Come one down past the break and we'll take a ride. 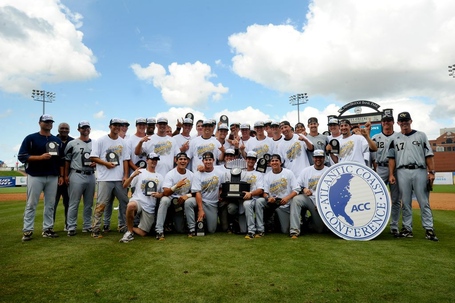 It was pretty ok there at the end.

The season started out an a fairly high note, when the JJ's took 10 of the first 12 games. There was the loss to Ohio State, which one could take as a sign of doom ("Joey and Nate outlook") or a sign of "meh" (the "its a long season, you're gonna drop at least one to a team you should beat" or "Winfield outlook"). However, as we got into the ACC schedule, things took a turn for the worst. We dropped two each to NC state and Boston College, which made us

the proverbial Stephen Hill of ACC series. It dragged on much like this for the rest of the season, with occational highs and lows. Keep in mind this is not the norm for the diamond jackets who usually put up around 40-50 wins in the 56-game college baseball season, and many of us were left disappointed. Two high points came around the end of the season though: beating Climpson and Jacket Leggett at home on a Daniel Palka walk-off home run in the 13th inning, and beating Miami on the last Sunday of the season to earn a berth to the ACC Tournament. From there, things really took off and the Jackets played the tournament to perfection. They went a perfect 4-0 and became the first ever 8 (bottom) seed to win the ACC since tournament play began in 1973. This strong momentum could not carry them deep enough into the NCAA tournament, however, and they were knocked out by UF by a LARGE margin earlier yesterday. So between all the pitching injuries, error bugs, and hitting problems, what do you think we'll fix next season? But more importantly, what black voodo magic did Danny Hall get ahold of to make the team play like that in the ACC Tourney, because we need to patent that.