Share All sharing options for: Monday Morning Recruitment Update Gets a Little Sentimental 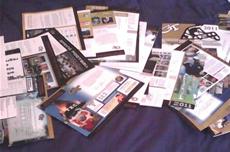 Last week one of our recruits got quite a package in the mail... (via i.usatoday.net)

One of the biggest stories of the week in recruiting was that of an Atlanta-area recruit who received a package of 52 letters in one day from the Georgia Tech coaching staff. Safety Charles Mack of Wesleyan High School opened a package one day containing "typed letters, hand-written letters, newsletters from the school...52 in all" according to what he told the AJC. Mack is the son of Charles Mack II, a Georgia Tech alumnus who played fullback on the Flats from 1983-1987. Charles II mentioned in the article that each coach on the coaching staff wrote a personalized letter, which is a very sweet gesture and really meant a lot to him and his family. (Time for an obligatory group "Awwwww"!)

Of course, being a Tech alumnus, Charles II has some sense and will not be the one making decisions on where his son goes to school (which makes our coaches' jobs a little tougher). However, Charles (III?) is looking like a very impressive safety who would be a major asset to our secondary, and hopefully his father's alma mater will have a good shot at getting him. Personally, I like the recruiting draw, between all of the normal pitches, his father being an alumnus, and the impressive, well-coached nature of our secondary the last couple years under the coaching of Charles Kelly.

With our recruiting, we've really been on a roll lately. Friday brought news of commitment #6, and Saturday we learned of commitment #7, marking the third week in a row that Georgia Tech has gotten 2 commitments. A report on commitment #6, LB Nigel Bowden, after the jump!

Nigel Bowden is a highly-touted linebacker, ranked the #10 inside linebacker in the country, ranked #247 overall in the Rivals 250 and considered a 4-star prospect. At 6'1", 230lbs he'll play inside linebacker for us and can hopefully make a big impact in the middle of our defense. He originally committed to Vanderbilt back in March, after he had visited Georgia Tech, but as the story goes his visit to Tech wasn't entirely "complete", we'll say. I say that because during the visit Coach Johnson, in a move of incredible class that draws amazing respect from me, was busy accompanying defensive back Jamal Golden to his mother's funeral. It ended up being a decision that cost us a recruit in the short run, but in true "what goes around comes around" fashion, we got him right back a couple months later. Bowden was on Tech's campus Friday with his mother, and it seemed like a situation where people knew what was about to happen but didn't want to jinx it. He met with Coach Johnson, was offered a scholarship, and committed immediately. He said he probably never would have committed to Vanderbilt in the first place if he had the opportunity to meet with Johnson on his visit (hence the "temporarily lost" recruit). However, the Macon native is very excited to be playing for the hometown team, and is a major pickup for the Jackets. And honestly, can you really tell me that this face doesn't scream "middle linebacker" to you? Nigel Bowden appears to be a bad, bad man -- one who I would not want to run into in a dark alley at night, but one who I cannot wait to patrol the center of our defense. 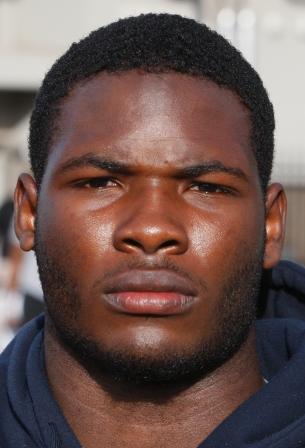 That face is something I would be terrified to be running towards with a football. Just saying. (via blogs.ajc.com)

One interesting impact he has on our recruiting situation is that his and Kevin Robbins' commitment leave only one more spot for a linebacker in the class, putting pressure on those with outstanding offers, including legacy Naim Mustafaa. We really want the kid, but he's been made aware that if we fill up at linebacker before he commits to us, he may be left out of the recruiting class. We'll see how this turns out for the Jackets!

What say you, FTRS crew? I'd say we have a bit of a reason to be excited about this team in the near future, wouldn't you? As readers tdot6 and Atlanta's original team pointed out on the Kevin Robbins fanshot, we're starting to run out of things that people were moaning about with respect to Paul Johnson's success at Tech....