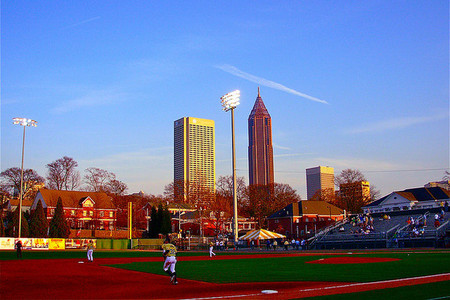 It was a bit of a frustrating ending to the Jackets' second game of the NCAA tournament, in that the Jackets had 12 hits to Florida's 9, but Florida was able to score 6 runs while the Jackets could only push 2 across. Buck Farmer threw a magnificent game considering it was against the #1 overall seed in the tournament, giving up only 7 hits and 3 walks in 7 innings, although they were turned into 4 runs. Tech was able to manage multiple baserunners in 6 of 9 innings, leaving 10 total on base.

An interesting moment from the game started with 2 outs in the bottom of the third. Senior 1B Jake Davies was at-bat with 2 strikes, when he foul-tipped a pitch into the catcher's glove for strike 3. However, he and Coach Danny Hall began appealing the umpiring crew, saying that the ball hit the ground before the catcher caught it, which would negate the third strike. Replay reviews showed that the ball did indeed hit the ground, and after an umpires' conference the decision was made to call the Florida defense back onto the field, but not before significant arguing from Florida head coach Kevin O'Sullivan.

With the loss, today Georgia Tech will again play College of Charleston, who beat Bethune-Cookman 8-2 to stay alive. Georgia Tech defeated CoC and top-10 draft pick pitcher Christian Powell in the first round by a score of 8-4. First pitch will be at noon EST, and the winner of the game will play Florida at 6pm EST. From there, a Florida win means they take the regional, while a Florida loss means the region will be decided Monday evening.

Go Jackets! Let's get another shot at Florida!