As mentioned in yesterday's article, we picked up two commits last week, the first being DT Darius Commissiong out of Forestville, MD. The second is a little more exciting for our program, more out of a position of principle than anything else. 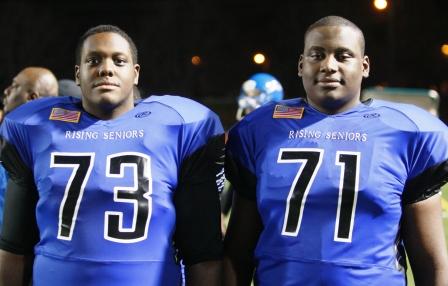 Commitment #5 came last Saturday evening in the form of the big OL Jeremi Hall, from Tri-Cities, GA. Hall is listed at 6'4", 335lbs and is currently considered the #6 offensive guard in the country for his class by Rivals. He's got a huge frame that dwarfs even that of Omoregie Uzzi (6'3", 300lbs) and should be a major help in clearing up the middle of the field on rushing plays. You may recall that Hall is best friends with Shamire Devine, the big offensive lineman we picked up about a week earlier. Hall said that he had no idea what Devine's thoughts or plan were in the days leading up to the commitment, but hearing him go public with a commitment to Tech reportedly played a huge role in Hall's decision-making process.

As usual, another couple notes after the jump!

As mentioned, Hall is best friends with fellow commitment Shamire Devine, who Rivals considers the #19 offensive tackle in the class. So to make this clear, I want to reiterate something that we pointed out on the Twitter account yesterday as I wrote this article: Georgia Tech has now signed two O-Linemen that are top-20 players at their position, as well as the top two offensive linemen in the state for the coming year. Ladies and gentlemen, I do not think that we're at a point where we can say that our program has arrived, but I want to take this moment to make sure you recognize the significance that statement holds. A couple years ago, all fans were worried about surrounding our program was "Can we really recruit for this offense? What O-Lineman wants to go to Georgia Tech and play in that silly scheme? How will they ever make it to the NFL playing there?" In a very short time, we've gone from that to seeing the commitments of two highly-touted guys within a little over a week. That's called progress, and it makes me think back to one of my favorite articles ever written concerning Paul Johnson.

Now it's your turn. Is it fair to call this progress? Are you impressed? Do you think we're setting ourselves up for disappointment?