Yesterday was the end of my vacation where there wasn't much time for writing an article between drinking beer by the pool and eating ribeyes grilled to perfection, so unfortunately I made you wait an extra day for the recruitment update. But there's some good stuff involved, so let's get to it!

We have a couple of commits to discuss, but first a note on a guy who's yet to commit. One of our top prospects who's yet to commit is 4-star legacy linebacker Naim Mustafaa, who is in the process of deciding between us and uga. He's making an important visit this week sometime, and could be making a decision between the rivals shortly after that. (link requires registration) Stay tuned... 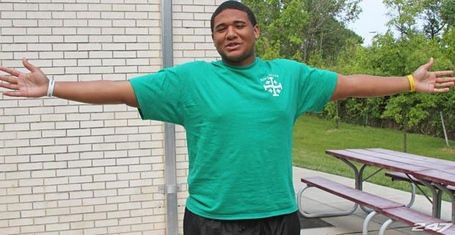 Now, on to the bigger news. Last Wednesday saw Georgia Tech receive its fourth commitment of the offseason from DT Darius Commissiong of Forestville, MD. Commissiong has been a project that the coaches have been working on for a while, and Coach Groh was able to lean on him enough to convince him to commit last Wednesday. (Notice yet another connection between Al Groh and a recruit from the state of Maryland...)

Another couple notes about Commissiong and a word on me being a skeptical pessimist after the jump!

Commissiong is listed at 6'2", 295lbs, which is a fantastic size for a DT coming out of high school. I expect him to put on about 20lbs before he sees significant playing time but he's looking to have a solid frame to begin with. Also, with as much D-Line talent as we got last year, should he not work out at DL then he has a solid frame to play offensive guard as well.

Call me a pessimist, but I'm really not too sold on a couple of these early commitments. It's likely influenced by the loss of OL Will Adams last year along with how chaotic everything was nationwide around signing day, where it seemed like poaching recruits from other schools was the name of the game. For me, some of these early commitments sound a little bit like moves of passion -- especially this one. Sounds like this one came after a long talk with Coach Groh, where he was able to get the commitment from him instead of it happening on Commissiong's own time. My concern with that is that the commitment is one of "OK, yeah, that sounds good. Guess I'm ready to commit!" instead of, "Hell yeah! I'm ready to freaking do it! Georgia Tech is the place for me. There's nothing anyone else can say to me that would make me second guess my commitment." I think our coaches have been very wary of the issue that poaching presents the last few years, as last year involved a bunch of stories where coaches were on the road for the sole purpose of checking in with recruits to make sure there weren't any issue of that sort. Hopefully it doesn't become a problem this year and we can hold onto these commitments until they sign with us in February, but until then I'll remain slightly skeptical, unfortunate as that may be.

What say you? Are you 100% confident in these guys? Do you think they're full of crap an aren't to be taken at their word? Somewhere in between?