Given our utterly inspiring run to the ACC championship this weekend, I figured I'd do a quick write-up of our chances in the Gainesville regional. As I see it, our best chance of getting into a super regional is beating College of Charleston Twice. Explanation follows. 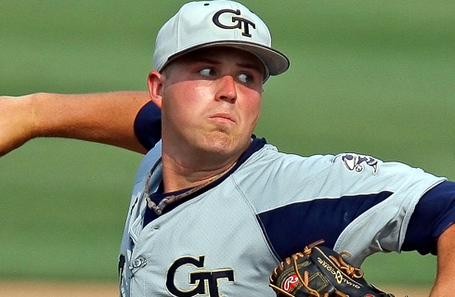 I wouldn't wanna hit against that staredown. Via grfx.cstv.com

The first pitcher We'll be facing is most likely College of Charleston's Christian Powell. In terms of ERA, he makes Buck (our likely starter for the regional opener) look like a child. However, he

a.) plays against inferior competition

All of these stats speak volumes. Regarding a.) I know the old "but his competitors suck" argument is a mundane, droll reminder of SEC fans in the college football arena, but there's a lot of merit to it. The ACC doesn't have a team outside of the RPI top 40 (e.g. in the top third of division one); Wake Forest is the lowest at 38 and we didn't even play them. CoC, who plays in the Southern Conference, faced opponents who had an average RPI of 97. Considering (b), one could argue this simply implies a different style of pitching, e.g. Christian is a groundout guy as opposed to Buck being a strikeout guy. However, I think the gap is just TOO big for such a simple argument to hold. 37 SO's? Thats not comparing apples to apples anymore, that's comparing apples to terminators. (c) doesn't seem like a big difference at first glance, but I'd say in terms of arm strength 10 innings is a long way. That's a whole game with extra an inning. (d), however, is the most telling stat in my opinion. The 5 R-ER difference between the two ins't a massive gap. This revels a lot about their team to me though. There isn't a big gap in errors between the two teams with tech having 91 and CoC having 83 on the season. The fact that they have less than us tells me they commit errors at critical times, and screwed because of it.