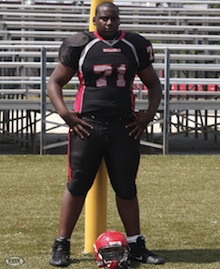 Surely you understand why I call him the "big" OL, because while O-Linemen are typically big, this guy is listed by Rivals at 6'6", 360lbs, and other places I've seen him listed at 6'7", 340lbs. Meaning this kid would walk up to TJ Barnes, look him directly in the eye, and match him pound for pound. This guy is BIG. He's also supposedly a hoss of an offensive lineman too, rated the #19 offensive tackle in the country by Rivals. He garnered a lot of attention at a regional camp recently as a very impressive blocker. Barnes was also recruited as an offensive lineman before moving to defensive line early in his time at Tech, but hopefully we can keep Devine on the offensive side of the ball to keep Synjyn, Vad, and Co. protected. Devine commits to Tech over offers from Florida State, Florida, georgie, North Carolina, Southern Cal, Pitt, Vandy, Kentucky, and Mississippi State. Translation: this is one Hell of a recruiting victory for Coach Paul Johnson and his staff.

Another couple of notes concerning him and some discussion about recruiting tactics we're employing, after the jump!

You'll remember that Devine is part of the dynamic duo out of Tri-Cities, GA, with his buddy Jeremi Hall being the other half. Hall is a guard, and at 6'4", 335lbs is the 6th-ranked guard in the country by Rivals. Early on they were said to be a package deal, though recently they've backed away from that mantra. Not to say that they won't end up at the same place, because they still might, but it's just not considered quite the guarantee any more.

Another interesting point is that he still plans to take a couple visits to other schools in the coming months. Now, before you go crying about how CPJ won't take too kindly to this, this is actually a situation he won't mind much. Devine made this clear up front when he committed. He's not lying to Coach, or changing his story, or otherwise bullshitting anyone. Also, his reasoning is as follows:

"One of the visits will be to the UK [Kentucky] because they were the first school to offer me a scholarship. I’m also going to Florida State because I promised them I would."

Personally, I'm less than concerned. This is not a big deal. He's taking courtesy visits, as a thank you to coaches who paid him a lot of attention and deserve more than just a middle finger on his way to the Flats. Have faith!

It's interesting that we got Devine over so many other good schools offering him, and some may begin to wonder why. Well, here's my theory. In Johnson's tenure, they've done a lot of investing in their recruiting. By that I mean, they're getting to know guys and developing a relation with them much earlier than others do. Now, that takes more time and effort to make happen, but I think it plays a significant part in getting commitments from high-quality players while we continue to develop other pitches (such as sending guys to the pros or being ACC Title contenders). Devine in particular is said to be very academically focused, something that is really not a common thing among the top 200 players rated on Rivals. Maybe that's entirely due to his background, or maybe his relationship with Johnson has had an effect on that. Remember LB Albert Rocker who left the team shortly before the season last year to start a job with Microsoft? I'm willing to bet CPJ has reminded Devine and other recruits of that a few times, so that they keep it in mind when selecting a school to attend. Recruiting has steadily improved in Johnson's time at Tech, and I think that has quite a bit to do with it. I look forward to seeing how they can further improve our efforts.

What say you, folks? Have we done better in Johnson's time? Is it just because we've been successful, or have there been relationships created that had a big effect? Do you think we continue getting better?