Monday Morning Moustache unfortunately wasn't too much of a hit, so it won't be a weekly feature any more. Instead, we're going to go with the slightly more relevant but slightly less of an alliteration Monday Morning Recruitment Update. This week in recruitment features 2 new commitments! 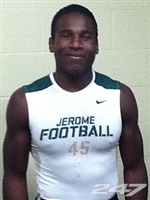 Commitment #2 was RB Donovan Wilson, out of Dublin, Ohio. He was very nearly a "spot commit" (as in, committed on the spot) but needed a couple hours to talk it over with his parents after receiving his offer from Coach Dave Walkosky before he committed on Tuesday evening. He becomes the second running back to commit to this class, and should be the final commit we have at the position since we're only looking to sign 2. Like the prior commitment, Travis Custis, he's listed at 6', 205 lbs, though Custis is slated to play B-Back and Wilson is slated to at least start at A-Back. You may be wondering what the difference is between them seeing as they're listed at identical sizes but are expected to play positions that have very different size requirements. I'll talk about that and more concerning him after the jump!

I think that it boils down largely to running style. Custis runs a little lower and a little more behind his pads as we look for B-Backs to do, whereas Wilson runs higher and could use his size to impose his will on defenders on the outside while playing the "big A-Back" role that Orwin Smith currently plays for us (he could also end up moving to B-Back if that seems to fit him better). Wilson was quoted on JacketsOnline.com as saying, "I feel like I will bring some physical play to the position because I like to hit and I don't shy away from contact or running someone over." (link requires registration) He's currently listed as a 3-star running back, but there's speculation that if he had not committed so early and had been paid more attention in the fall, he would have been bumped up to a 4-star prospect. He commits to Georgia Tech over offers from Purdue, Boston College, Air Force, and Ohio, although his older brother recently signed on to play WR at Iowa this fall, and an offer is still expected from them.

Also, while we're still on the subject, I want to mention what a blessing it is to have Dave Walkosky on board with his familiarity with the Ohio area. It's a fertile football recruiting ground and certainly something that will be good for us to tap into. Our coaching staff benefits from his knowledge of Ohio as well as Al Groh's knowledge of Virginia, Maryland, and the DC area, which has produced prospects such as Jeremiah Attaochu and Louis Young and most recently Roderick Chungong.

Tomorrow we'll discuss the big guy we picked up at #3, Shamire Devine. But for now, congratulations to Donovan Wilson, and welcome to the Flats!

Now I'm interested to hear your responses. What excites you more about this commitment -- his on-field potential to help on the outside, or that we were able to lock in a guy from Ohio, where we haven't traditionally been able to recruit?