As a young man who is not an avid golf-watcher, I was not aware of who our own DressHerInWhiteAndGold was referring to when he requested a profile of a man named Gary McCord and his "elegant cookie duster". However, after a little research, I've learned of the gentleman, his mustache, and why I've never heard such a famous golf commentator call the Masters.

As you can see, this fellow does indeed have a magnificent mustache (a bit of an homage to Rollie Fingers), which when paired with a small patch on his chin makes for a flawlessly executed goatee. I love its presence in the game of golf too, as it adds a nice goofy element to a game that is sometimes taken a little too seriously. As some out there are likely familiar, McCord is a commentator for CBS's golf broadcasts 51 weekends out of the year, with the exception being the Masters weekend. Why on Earth would he miss the Masters of all weekends, you ask? Well, Augusta National hasn't exactly invited him back since 1994.

(The story, as well as other golf-related news, after the jump...)

You see, that goofy mustache goes onto a somewhat goofy individual, known for having a bit of a reduced size on his mental/verbal filter. In 1994, he spoke of the 17th green as being so fast that it seemed "bikini-waxed", and that they had body bags behind the green for participants who missed on their approach shots. I would never understand why, but the prim and proper officials from Augusta National didn't see those comments as desirable for their tournament, and used their power to deny CBS from ever bringing him back. (Also, for what it's worth, 1984's FedEx St. Jude Classic in Memphis saw him split his pants while lining up a putt on the 15th hole, revealing that he wasn't wearing any underwear. It was a bit of an awkward moment for all involved, to say the least.) 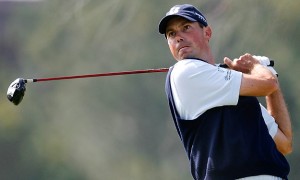 While we discuss golf, I was not watching yesterday, but I have a hunch that if CBS was covering the TPC Sawgrass, that McCord was present and doing color commentary as Georgia Tech's very own Matt Kuchar took home the title with a 2-under 70 on Sunday, good for an overall score of 13-under and a two-shot victory. Congratulations to Matt!