Monday Morning Mustache: When Sports and Art can Be Friends

Share All sharing options for: Monday Morning Mustache: When Sports and Art can Be Friends

Last week's poll winner was Pitcher Rollie Fingers and his Salvador-Dalí-inspired 'stache (better known as the "Snidely Whiplash"). I make comparisons to Dalí not because each was curly, but because each had a ridiculous, identifying, and signature mustache. 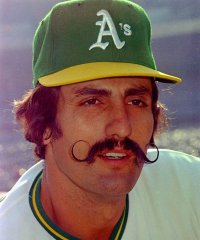 That is such a 70's-tastic 'stache. (via profile.ak.fbcdn.net)

I say 'ridiculous' because, well, when's the last time you saw someone with a mustache like that and weren't at least a little bit alarmed? I say 'identifying' and 'signature' because if your son came up to you and asked, "Who's Rollie Fingers?", you'd be like, "Son, I can't be certain but I think he was a pitcher....though I KNOW he had an absurd mustache." Which is exactly like if someone came up to you and said, "Who was that artist with the ridiculous mustache?", you'd have no choice but to answer with, "I'm not an art fanatic, I have no idea," or "Salvador Dalí." 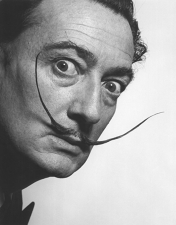 Seriously, this mustache looks like it's flying away, which makes me a little uncomfortable. (via cloud.lomography.com)

Fingers is widely regarded as one of the best relief pitchers in history, and a major source of the creation of the "closer" role. He was only the second reliever ever to be inducted into the Baseball Hall of Fame in 1992 and is one of only 8 players to ever have his number retired by more than one team (Fingers had his retired by the Athletics and Brewers). Further, as baseball lore has it, Pete Rose offered Fingers to play for the Reds in 1986 after he had retired the previous offseason. However, Reds owner Marge Schott had a "clean-shaven" policy for each of her players, which would imply that Fingers would have to shave his 'stache in order to play for the Reds. In response, Fingers did what any man being asked to shave such a classic piece of facial hair would do and gave her a smart-ass remark, saying, "You shave your Saint Bernard, and I'll shave my mustache." I imagine he then put on a pair of sunglasses and sped off in a sports car, with her fuming and her husband laughing silently behind her.

All hail Rollie Fingers, pioneer of the closer role, and more importantly the classic Snidely Whiplash!