It an announcement made an hour ago on ESPN"s Sportsnation TV show, it was announced that Calvin Johnson beat out Cam Newton in a fan vote to determine who got the front of EA Sports NFL video game Madden 13. The above picture is a screenshot of the ESPN website at the time of this publishing. 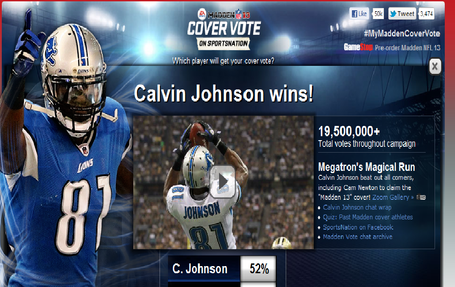 Fans of Georgia Tech know how valuable Calvin is to a sports squad and with the growing success of the Detroit Lions, his fame has continued to pick up steam. This is just one more step in CJ's career towards being one of the greats in the NFL.