In recent events that I totally should have seen coming, last week's MMM article poll concluded with Tech's white helmets winning almost a simple majority of the vote (48%!) over Aaron Rodgers' porn-stache, Adam Morrison's pedo-stache, and the classic Rollie Fingers Salvador-Dali-inspired-stache. So, as promised, here is a profiling of the Georgia Tech white helmets. 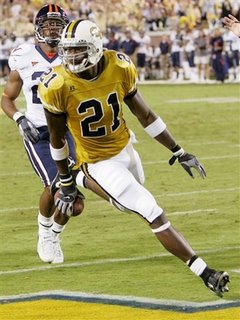 That spoiled mustard color is reasonably ugly, but good Lord those helmets are sexy. (via www.utvols.com)

When looking for our historical uniforms, I found this really nifty PDF that details our uniforms through time. According to it, we used white helmets mostly through the 1960's, more specifically between '64-'66 (under Bobby Dodd) and again for '68-'71 (under the newly-appointed Bud Carson). Other than those years, our uniforms have always involved a gold helmet, and while it is a very classic look that is a signature of our program, there are some fans out there (48%, apparently) who wouldn't mind a swap to a white helmet. There was a wonderful blog post detailing some possible changes to our design scheme about a month ago that I would HIGHLY recommend reading if you haven't already. 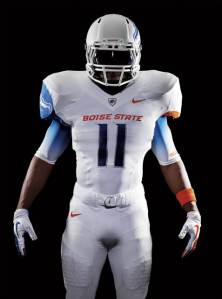 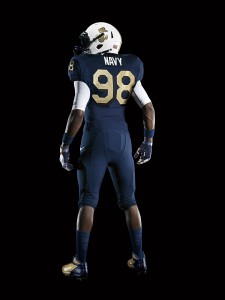 Here are two absolutely beautiful jerseys, Boise with white everywhere and a touch of blue and orange mixed in, and navy with a simple navy suit highlighted by the gold numbers and white helmets. I don't know why it is, but for some reason white helmets look better than colored ones for me. You can even compare Florida's blue and white helmets, and I really like the whites. Same with Cincinnati's black and white helmets, I love the whites and I'd love to have us at least add a white helmet to our combinations.